Byrde has a minion! 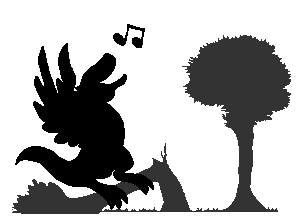 Once upon a time, you see, there was this ugly little bird who did not know what he was or where he came from. The egg from where he hatched was left abandoned by the sandy shore. So he went on a journey to find out what he was — actually, what he was not. He had feathers coming from his arms, were those wings? Could he fly? Then maybe he was a bird. Now, which kind?
Nearby the shore, there were the seagulls, so beautifully spreading their wings wide up in the air. And hey, he had a nice pair of wings himself! He was probably one of them, he thought to himself. But all the gulls laughed and laughed at him, that poor ugly thing pretending to be one of them. With his head down, the ugly bird went away. Making his way away from the shore, by the bushes he found a partridge's nest. They were such noble creatures, those partridges, the way they held their heads up the sky, he thought "Hey, I can do that!", maybe that was it, that was what he was! So he made his best effort to hold his head up in position like they did, folded his wings by his back and put up the most noble face he could think of. And the partridges laughed at that scene, that hideous creature trying to be fancy like them. And the ugly bird ran away ashamed.
By the time he finished running, he heard a couple of hawks floating up in the clouds, their eyes fixated on whatever prey they were after. Maybe he was a hawk! He had sharp eyes, after all. He pushed himself to the air, as high as the hawks were roaming, a big smile across his face, oh he was so sure he was one of them, that he finally found his family. He found a rabbit jumping around a field, and with the hopes of being noticed by the glorious hawks, he dived to the target's location. The couple of hawks did notice that ugly bird diving by them, going for the same prey they were going. Except that the ugly bird not only crashed in the land several meters away from the target but also scared away the rabbit. The hawks were furious at the ugly bird, and had him cast out. Once again, the ugly bird was left alone. 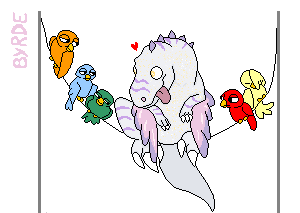 Still a bit sore from the miscalculated landing, the ugly bird went to a pond to clean the mud from his face. There he saw a heron standing still while trying to fish. Of course! Splashing around, the ugly bird approached the heron and kept a still pose, lifting one leg to the front of his body like the heron would do. And he splashed again, falling in the pond. The heron rolled his eyes at the disturbance, and flew away. Reflected in the water he saw a flock of holy storks crossing the sky, following their migration route. The ugly bird was happy again, he could still find himself out there in the world. So he ran and ran and ran and pushed himself up the air, rushing to meet the storks. He reached their flock, but by the time he managed to do it, he was too exhausted to keep up with them. He thought to himself, maybe that wasn't yet who he was. And he flew back to solid ground.

There were many trees by the time he landed and the air of the place was thick and moist. A hummingbird crossed his way, flying quickly by the flowers. That hummingbird did not need to travel many miles, so yeah, could do that too! Running around he found a flower to lick, but by his tongue the flower was plucked. The hummingbird giggled, for that was such a pathetic scene to be seen! The ugly bird spit the flower, eek, that wasn't his thing either. Sitting on a tree nearby there was a toucan. The ugly bird had a pointy nose too! He approached and grabbed an orange, the toucan was happy to share with the ugly bird. But he spit that too, for the peel was too bitter for his tastes. And ugh, too sour too! If it wasn't for a woodpecker working nearby, he would have forced himself to eat the orange - and thankfully the woodpecker drew the ugly bird's attention so the toucan could have back his fruit. Well, and perhaps that nose of his was made exactly for that too! Turning to a tree, he slammed his nose on its thick bark — OUCH! The woodpecker would laugh and laugh, nope, definitely the ugly bird was not made for that.
The ugly bird kept on his journey to find who he was. He spotted a red ovenbird making his nest, and that cheered the ugly bird for a moment. That's it, that was a job he could do. He gathered around some mud and started to build his house. It would be so perfect all the others would be jealous! Except that when he sat there by the branch to start the building of it, his arms couldn't really reach the perfect spot in the corner, so the pile of mud fell from the tree. And he knew that wasn't what he was meant to be, again.
He woke up to the fluttering of a dove, a very pretty pigeon singing a praise to the coming sun. His heart was overflowing with hope once again and, renewed by the sleep, he filled his lungs and opened his mouth wide to join the song: GROAR! He seeked for her reaction but the pigeon had disappeared — apparently as he opened his mouth. But he heard an echo of his music from the distance. Another noise just like his, and then one more.

The ugly bird opened his wings and flew straight to that direction, knowing for sure that this time he would find out what he was, and finally meet a family of his own.

Halwn as Vilho;
Story and art by me (