Listening has a minion! 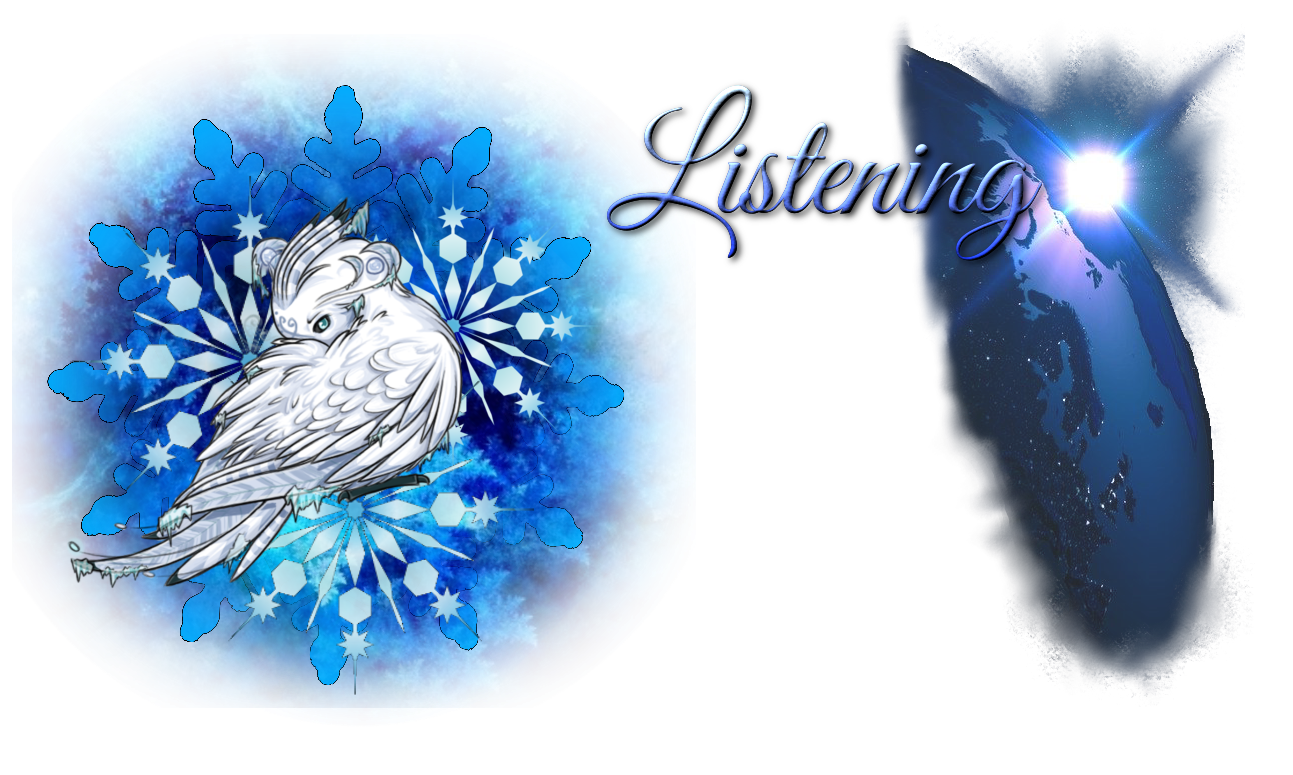 I am a Radio Astronomer.
I love listening to the pulses
and sounds of space;
the strange, spooky symphony
of the cosmos...
~Fiorella Terenzi~

Almost from the moment she was born, Listening had a habit of picking up on every detail of what was going on around her, almost as if the lovely lain was a satellite fallen to Subeta and orbiting around anything and everything to do with space exploration. It will come as no surprise that she has dedicated her life to learning more about the wider galaxy.

She lives in spacious quarters in the Observatory, an enormous research facility filled with radio and optical telescopes with which she notes her observations and tries to puzzle out mysteries of deep space. The station is high on a mountain that borders StarFrost Village and SAI.

Her official job title is Radio Astronomer and above all else, she loves listening to and capturing the strange, spooky symphony of the cosmos.

Unless you happen to have an Advanced Physics degree from Subeta University, you may not know all that much about Radio Astronomers. Radio astronomy is the study of celestial objects that give off radio waves. These watchers of the sky study such phenomena as galaxy properties, radar investigations, solar radio observations, interstellar radio lines, quasars and radio wave emitting phenomenon.

Listening has a Doctorate degree in both astronomy and physics. She followed a rigorous study schedule that took nine and a half years to complete. That's more years in school than a doctor!

Her tool of the trade is a specialized radio telescope with a high-frequency receiver that can pick up radio waves from astronomical sources. Think of the dish you use to get all your favorite Subetan TV shoes and multiply the size by ten. A single antenna requires a dozen tier 12 employees of SAI to move into position. Since astronomical radio sources such as planets, stars, nebulas and galaxies are very far away, the radio waves coming from them are extremely weak, so radio telescopes require very large antennas to collect enough radio energy to study them, and extremely sensitive receiving equipment.

There have been a few complaints from concerned citizens about the potential electromagnetic interference that could do anything from cause static on the television to shutting down all the cars withing a city block in the heart of Centropolis. SAI has promised all proper safety measures have been taken in the building of the Observatory. There will always be a few conspiracy theorists spouting their doom and gloom but other than one particularly interesting incident with a flying toaster, no known incidents of EMI have occurred.

Listening doesn't concern herself with such politically charged issues. Her focus is on the interactions of galaxies and their satellites. Every subtle note reveals details about the cosmos that are heard rather than seen. She observes distant quasars, galaxies, black holes, and stars by tuning into their radio frequency and listening for the radiation signatures an object emits. Acoustic astronomy, as she calls it, involves not just observing but listening to the pulses and sounds of space.

Like the soothing rhythm of a heartbeat that lulls an infant to sleep, these sounds of deep space allow her to feel completely at peace and connected to something so much larger than herself.

She is known and respected for her high IQ and appreciated for her sense of humor though her co-workers have learned never to disturb Listening when she's in the middle of a listening session. To lose a sequence midway through is almost a physical pain.

When she steps away from her work station to visit the kitchenette, her meal of choice is warm quinoa with diced cold green and red apples and various nuts mixed in. She's fairly adventurous with food and will give any of the Chelon Cuisine meals a try as long as there are no beans. Green, brown or white, she hates beans in all of their forms. Those little pods of nastiness, as she calls them, will end up in the nearest trash receptacle if spotted in her food.

Along with her fellow astronomers, she counts Starflare among her dearest friends. The two go all the way back to Subeta U and they often will grab a cup of coffee after work or sit side by side on the Observatory roof to watch the progress of a shooting star.

Also dear to her heart is her minion Sputnik. He likes to curl up in her lap and hum softly while she's working, though he seems to have a sixth sense of when to be quiet, so as not to disturb her ability to listen. He sometimes tilts his head as if he too is picking up on the frequencies of a far distant galaxy.

In her spare time, Listening takes secret delight in turning the rhythms of the cosmos into music. She has created everything from smooth jazz to hard rock using sound waves recorded to her laptop. She has set up a public radio station for the listening pleasure of all and takes enormous pride in all the thank-you letters she receives from listeners all over Subeta.

Her secret desire is to reach a wider audience, one from a distant galaxy that will befriend Subeta for an exchange of knowledge and culture like no two worlds have ever seen.

Straight On Til Morning