Sprinkles has a minion!

You’re at the headquarters for the SAI and you’re looking for the bathroom. You take a right when you probably should have taken a left and you walk into a colorful room, reminiscent of a child’s nursery. A sign on the wall says “Sprinkles” in big, colorful letters. A reddish purple creature who seems to be giving off energy in the form of red, crackling electricity steps out from behind a giant teddy bear on the floor and gurgles inquisitively at you. “Sprinkles?” you ask, mildly confused.

The creature shrieks, and for a moment you aren’t sure if it’s angry, scared, or excited. It rushes towards you and before you have time to react it has enveloped you in a kind of hug. The electricity sparking off its skin feels tingly and pleasantly warm to the touch. You look around, wondering what the heck just happened, when a man chuckles from behind you.

“That’s her name.” the man explains. “She picked it out herself. We had sprinkles on ice cream as a treat shortly after I found her, and she became enamored with them. Once I taught her to write she insisted that’s what we call her.”

“...What?” is all you manage to get out. The creature at your feet has released you from the hug and goes back to sit at the feet of the massive teddy bear, making contented wet noises.

“I’m Special Agent Colfax. Sprinkles here came to us from another planet. We don’t know much else about her, but she's been my friend for a very long time. It’s getting close to naptime for her though, so if you don’t mind…”

The man gestures at the door behind you, and you wander back the way you came, a little more weary, and much more confused. “Just another day for the SAI,” you say to yourself. 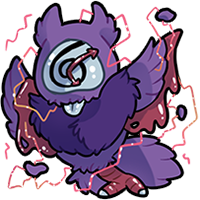 Rainbow Pie of Everything Wondrous