Rosy was tending to the flowers in her garden in the early morning when a dragonfly caught her eye. Or, at least she thought it was a dragonfly. It moved like a dragonfly, and had wings similar to a dragonfly, so she could be forgiven her mistake. It flitted into her vision breifly, flying around the rose bushes and zipping past the peonies. She looked up from the patch of strawberries she was weeding and stared at it. It hovered for a moment, unmoving in midair, and before Rosy could comprehend what she was seeing, she had a strange thought, "It's looking at me." The next moment it was gone, and Rosy sat back on her heels in shock. Her next thought came unbidden to her mind: "What the f##k."

The dragonfly-like creature returned the next morning, and this time Rosy was ready. "I've got a saucer of cream for you, fairy, if you want it," she said, not looking up from the begonias. Her grandmother had taught her all about fairies, about what they liked and what they didn't, and what to look out for. She always stressed to Rosy that fairies could bring good fortune or bad, but above all were not to be trusted. Of course, Rosy had always thought it was all bullcrap, but apparently she needed to rethink that assessment.

Out of the corner of her eye, Rosy watched as the little fairy landed on the edge of the saucer and began to drink. It was tricky to observe the fairy without looking directly at it, but Rosy was patient, and kept the saucer in her field of vision at all times as she worked like normal in the garden. When the saucer was empty, the fairy shook itself off and flew away once more. Rosy could only hope her offering had been satisfactory. If what her grandmother believed was true, the fairy could will every plant in her garden to wither with only a thought, if it found itself displeased with her, or worse. Rosy couldn't take that chance.

Rosy's grandmother had taught her more than just about fairies. She had taught her to garden. She taught her which plants grew best together, and which would strangle each other or strip the nutrients from the soil if they were placed too close to one another or planted too many years in succession. Rosy knew every plant in her garden, and many others that didn't by name. She had learned how to can fruits and vegetables, and how to make jams and preserves. As a child, she had loved to watch her grandmother in the garden, humming a song and making the plants grow tall and plentiful as if by magic. Her grandmother's garden, now Rosy's garden had always been a magical place, but now that word took on additional meaning.

The next day, Rosy was out in the garden again, and this time she was visited by two fairies. She got a better look at them this time, as they landed upon the saucer of cream to drink. She could see now that they had landed that their wings were closer in shape to a butterfly, than a dragonfly, though when flying they moved so fast they were a faint blur. One had wings of bright blue, like the Caribbean sea. That was the one that had visited her the previous two days. The other had wings of purple with green at the base, like a flower in bloom. They had pale bodies, that were shaped like miniature children. Rosy wanted to ask them questions, but she knew better than to interrupt their meal. If she had learned anything about fairies from her grandmother, it was that fairies hated rudeness, and had no qualms about punishing people who ticked them off. Besides, she didn't know if they spoke English, of if they spoke at all.

When they finished the cream, Rosy was watering the hydrangeas along the garden wall. She wrapped up the hose and walked it back to the spot where it attached to the water main in the center of the garden. She had placed the saucer of cream on top of the birdbath which stood near the stand for the hose, and as she turned off the water and draped the hose on the stand she could feel them watching her.

"Hi," she said, not sure what the proper greeting for a fairy was, "I hope you like the cream. It's from Father McHannity's cows. He knew my grandmother. Loved her, I think, but he won't admit it because of the collar. He always gifts me fresh milk and cream. I think in her honor."

One of the fairies, the one with blue wings, flew up to her and hovered a few feet from Rosy's face. It held out an acorn in its two tiny hands.

Rosy stared at it. "Is that for me?" she asked cautiously.

The fairy held it out further, its little face a mask of determination.

Rosy held out a hand and the fairy dropped the acorn into it. She examined the acorn, but it looked no different than any other acorn she'd seen in her life.

When she looked up again at the fairy it was pointing East. Rosy looked that way but saw nothing out of the ordinary.

The fairy gestured for her to follow and flew to the garden gate. Rosy put the acorn in her pocket and wiped the dirt off her hands. "Here goes nothing," she thought aloud and made her way to the garden gate and the awaiting fairy.

When she got to the gate the fairy flew through it and waited on the other side. Rosy followed and shut the gate behind her. The fairy then led her up the road and towards the church.

The church was an old gothic-style cathedral, built decades before Rosy's grandmother had even been born. Father McHannity held services there every morning just after dawn, and twice on Sundays. Instead of leading her up the steps to the church's front door, the fairy led Rosy around to the cobblestone path to the left.

Rosy stopped in her tracks. She suddenly thought she knew where the fairy was leading her.

"Sorry," she said to the fairy, who was hovering in the middle of the path. "I should get back to the garden."

The fairy flew closer to Rosy and pointed to the path, the same look of determination on its face as when it had handed her the acorn.

"I didn't finish watering or weeding," Rosy said. Her voice sounded as hollow as she felt.

The fairy crossed its tiny arms and made a faint buzzing sound that reminded Rosy of an angry bee.

"I'm sorry," she said again, and turned to leave.

The next day no fairies visited her garden, or the next. Rosy thought they would simply never return and that would be the end of it, but on the third day since the fairies had left Rosy began to notice her plants were dying.

It wasn't just one plant, it was all of them. It had started as a little yellowing here, a little wilting there, and for the first couple of days Rosy had assumed it was just a fluke of too much sun or too little water. She couldn't ignore it anymore, however. It was as if they were all dying of the same invisible malady. Rosy put cream out for the fairies, but none came. She worried this was her fault.

On the fourth day, Rosy was desperate. She had tried everything she could think of to bring life back into her plants, but nothing was working. She did the only thing left she could think of. She went to the library to see if she could find anything credible on fairies.

The library was down the street a ways and on the opposite end of town as the church. Rosy sometimes wondered if that was metaphorical by design, but she knew her grandmother would not have liked that thought so she always kept it to herself. The library didn't have any computers. The head librarian still insisted they were a fad that would pass. Rosy headed to the giant card catalog in the center of the library.

Everything in the card catalogue was arranged by the Dewey Decimal system, which Rosy had learned about in school years ago, but she remembered almost nothing about it. Thankfully, all the categories were helpfully labeled, and with a little narrowing down her search, she found section 398: folklore, and in that section 398.21: fairy tales.

Fairy tales were for children, as far as Rosy knew, so she felt a little silly tracking down that section of the library, but thankfully no one but the librarian seemed to be there. She found the right shelf and thumbed through the spines looking for any sticker with 398.21. There weren't very many.

The first book she found was a collection of Fairy Tales by the Brother's Grimm. She flipped through the pages, looking for anything about fairies, but despite the name, there were only a few stories featuring the creatures. She shut the book and picked up the next, a book of Irish Folk Tales. More of these stories featured fairies, and they were often the little winged creatures she'd seen in her garden. She tucked that book under her arm to take with her. She was about to leave when one other book under the same classification caught her eye. It was titled Fairy Rituals. 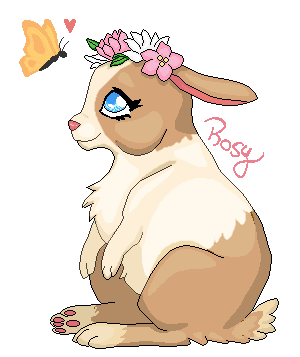 Purple and Red Floral Watering Can