Marichat has a minion!

A Kitty and His Princess 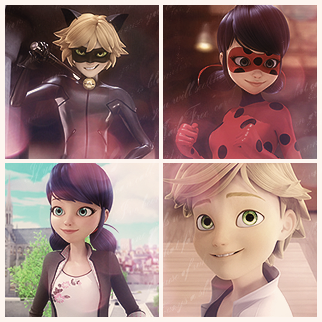 See? Two people! And the best part? They have absolutely no clue! Their superhero counterparts have no idea what-so-ever what the other person’s civilian identity is. None. At. All.

Dizzy yet? It’s just so beautiful!

How this pair WORKS!

In-canon, both Ladybug and Chat Noir are (not-so) blissfully unaware of their secret identities, thinking that it would keep them from becoming too attached to one another.

Marinette has a crush on Chat Noir's secret identity Adrien, but it far too afraid of rejection to tell him how she feels. Chat Noir has feelings for Ladybug, broadcasting them through casual flirting, but Ladybug's interest in Adrien and a barrier of professionalism keeping them apart.

Because they do not know each other's secret identities, this removes those barriers when Marinette (as Marinette) talks to Chat Noir (as Chat Noir). Marinette is able to talk to Chat at her own level, allowing her to talk openly and confidently to Chat as opposed to her usual nervous demeanor around Adrien. This could even cause her to admit her feelings for Adrien to him, allowing her to essentially confess her feelings to him without even knowing it.

Chat Noir is able to speak to Marinette in his usually manner without the need to keep his image, and would even be able to confess his more sincere feelings to Ladybug without even knowing it.

With this openness to one another, this could cause the two to eventually fall in love under these identities, eventually leading to the realization that those they longed for were also the ones they then fell in love with.

Overlay edit, profile, and story (except for credited bits) by me.

Marichat is based off of the character pairing of Marinette Dupain-Cheng and Chat Noir from the French television show Miraculous Ladybug. I ONLY watch this in French unless I don't want to wait for subtitles then I watch the icky English dubbed. My French is not that good. *le sigh* My Franglais though is totally legit.