Doctor Doom has a minion! 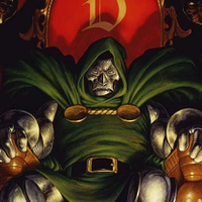 Victor von Doom was born into a Romani family in the European nation of Latveria. His mother, Cynthia, died in an incident with the demon Mephisto (see SHIELD file 699.6). His father, Werner, was a medical practitioner who later died of exposure after fleeing for his life when a Latverian noblewoman died under his care.

Von Doom began to study both science and magic in an attempt to rescue his mother from Mephisto. He was offered a scholarship from State University in New York, USA to further pursue his scientific studies. Here he made the acquaintances of Reed Richards (AKA Mister Fantastic; see SHIELD file 614.1) and Benjamin Grimm (AKA The Thing; see SHIELD file 614.2). While at the university, von Doom attempted to develop a machine to project astral forms between dimensions; however, von Doom's prototype was flawed and exploded upon use. The explosion reportedly disfigured von Doom, and he was expelled from the university for a breach of scientific ethics. According to Grimm, von Doom placed the blame for both of these events on Richards. (NOTE: Dr. Richards allegedly holds a corrected version of the prototype's plans, but has never made them available to SHIELD; obtaining these plans is a Level 3 priority.)

After leaving the United States, von Doom appears to have travelled extensively, eventually staying for a time in a monastic village in Tibet. Though records of this time are sparse, it appears that von Doom and the monks built his first suit of powered armour at this point. Upon leaving Tibet, von Doom returned to Latveria, where he overthrew and killed King Vladimir Fortunov and installed himself as monarch. Further information about Latveria can be found in the SHIELD National Database.

Due to his personal history with Reed Richards, many of von Doom's crimes have either targeted or been foiled by the Fantastic Four, but due to his power, status, and resources, he has also faced the Silver Surfer (AKA Norrin Radd, SHIELD file 843.8), Daredevil (AKA Matthew Murdock, SHIELD file 795.6), Iron Man (AKA Anthony Stark, SHIELD file 362.3), Captain America (AKA Steven Rogers, SHIELD file 204.2), and several incarnations of the team known as the Avengers (SHIELD file 201).

Von Doom has experienced several large-scale victories in his time as an active supervillain, including draining the power of the Beyonder (SHIELD file 999.9) and becoming emperor of Earth with the unwilling assistance of the Purple Man (AKA Zebediah Killgrave, SHIELD file 789.1). He also successfully freed his mother from Mephisto's control with the help of Doctor Strange (AKA Stephen Strange, SHIELD file 379.4). Von Doom also spent some time inactive; reports given by the Fantastic Four state that he was in Hell (SHIELD file 166.6) for the duration after a failed scheme involving the young Valeria Richards (SHIELD file 614.6).

After the incident known as the Second Civil War (SHIELD file 9756.2), von Doom took up the mantle of Iron Man when Stark was rendered comatose. He was last seen attempting to depose the government of Latveria with the assistance of Zora Vukovic (SHIELD file 3061.4).

CREDITS
Story and profile by

The Frustrations of Public Office

A History of Necromancy