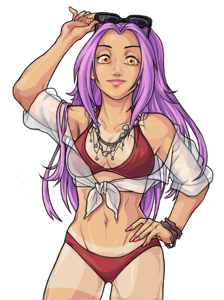 He-eyyy! I'm only stepping away from the shack like, for a minute. But I'll be back soon so like, don't even worry! No it's fine, I don't need walking back, I'm like, super trained in self-defense as well as beach-rescue. You seem like you have it covered, but like, if you do want a few pointers I can maybe like, help you out. Under the right conditions because I gots things to do.

Maybe the next Friendly Challenger will just be honest and say "Hi, I have an exact yet convoluted set of instructions to unlock me but the clues I leave you will be irrelevant and possibly misleading. In the end the solution will be so random that it'll have to be leaked."
13

Has the challenger ended because I can't seem to trigger her. I've lost and went to her shop and nothing. *cries*
0

Omg she's at a level i can actually manage, sweet
3

Thanks all for the help! I could not have gotten her without it. :)
0

Thanks. That was the point I missed because nothing happened after I not only let a T1 but also my T11 get killed by the Buttwing xD
0

Spoiler (click here to toggle)
After your lost, you need to go visit the Beach Shack.
0

Lol, I forgot to turn off weapons! Thanks.
0

@FCoD keep clicking "make your turn" without clicking any weapons. You basically stand there and let it slowly poke you to death.
1

@spiralgalaxis Thanks for the tip!!
Spoiler (click here to toggle)
Also for anyone wondering how to lose, it doesn't matter if you use a trained pet or not so pick a low health pet and don't select any weapons when fighting. Easy Loss!
2

just a heads up, you can use a turn during battle by not selecting anything whatsover. literally do absolutely nothing and buttwing bomber will kill you. eventually. lol
(i'd recommend just using a pet with default stats honestly)
0

How in the heck do you get a pet to lose to Buttwing Bomber? I tried and it doesn't work, lol. She keeps winning. Back to try some more.
0

Lindsay challenges you to a fight in the Battle Coliseum!
0

What if you showed her that you do not, in fact, have it covered?
I unlocked her by:
Spoiler (click here to toggle)
getting my T7 to lose to Buttwing Bomber, and then visiting the beach shack.

By losing to a really easy opponent, you prove to her that you don't have it covered and could really use her help learning to fight.
Also, does anyone know what her avatar's using for eyes and nose?
8

yeahhhh i figured it out!! i'm proud of myself lol

@jensen i will fix her height along with the others tomorrow!!
2

@Amber
lindsay is too tall on the opponents page (like fantine and kain), i am afraid
0

"Oh geez, you do need some help. Ok, I'll show you what to do, try and attack me!
You've found a Hidden Opponent!
Lindsay challenges you to a fight in the Battle Coliseum!"

big thanks to amber and @Dannica for hints *w*
0

Wow...then dialogue is a little one sided, I think. A hint would be great please. :)
0

@Muerte It's a little confusing, but think it's sort of missing our part of the conversation & the "You seem like you have it covered" bit is actually about us (the collective player character) looking like a strong enough dude or something (not our "covering" the shop), so she's down to friendly fight/train with us, if we want. But, later though, because she's got stuff to do & we need to run this shop / unlock her first!

If you want to see, I kind of broke it down when I was trying to parse this:
Lindsay text breakdown
"He-eyyy! I'm only stepping away from the shack like, for a minute. But I'll be back soon so like, don't even worry!"
Lindsay: Great so see you! Do me a favor & run the shop for me, k?
User: uh. Alright. Do you need me to come get you after...?

"No it's fine, I don't need walking back, I'm like, super trained in self-defense as well as beach-rescue."
Lindsay: Nah, I'm a strong, independent woman {...}

"You seem like you have it covered, but like, if you do want a few pointers I can maybe like, help you out. Under the right conditions (unlock me) because I gots things to do."
Lindsay: {...}BUT, if you want to work out later, hit me up. But not now! Later! (maybe in trade for watching the shop? maybe we are just two hardbodies being hardbodies together? ha.)

User: but i don't know how to run your shop. please come back. :(
Hope that might help you a little~

Other than that, I have no idea what to do to unlock her. Everyone else has tried the things I thought of. :(
2

@Princezz
She's looked like this a little while, but I did dig up her old art, I think..
Spoiler (click here to toggle)

Wait, did she get a revamp? I can't tell because I forgot what she looked like before.
0

@METROID with the amount of attention she's receiving i honestly would be surprised if someone hasn't tried that, lmaoooo
0

Has anyone tried going in there naked? You can't really defend yourself if you're naked.
0

I may or may not have a crush. She also reminds me of Karen, from Harvest Moon FoMT. ♥️
5

Nope
I started clicking on her repeatedly with

not working -
Spoiler (click here to toggle)
went to her shop with a "thief" item in the inventory, also rsed
0

Wow, I might actually have to give hints on this one :eyes:
19

wearing these does not work
I visited her shop with weaponized pool noodle, vanity sunglasses and sandals, vintage swimsuit, swampie inner tube, ontra water wings, dolphin towel, empty bottle of sunscreen (the sunburn one).
No dice.
0

Her loot items might also give a hint, but I'm not sure.

The self-defense thing might be relevant, but IDK how to turn that into a way to unlock her.
1

Yeah I'm not really sure what to make of it either lol.

Here's her Subetapedia text, in case it helps at all:

* Helped run Peka-Boo
* Works out daily, both before and after work
* Learned to swim later in life; although she’s not terribly fond of it, even if she does love the beach
* Forgot to wear sunscreen once and has never made that mistake again; always tells people to put on sunscreen
* Went on a trip to someplace mildly cold and complained the entire time
6

The text is a little confusing to me, but it looks like it's meant to be her turning someone down, denying their advance to "help walk her back," her turning it around like she'll teach them how to fight if they need it.
It honestly looks like a mix of both stepping away from the Shack and you're in charge, and turning you down for help + suggesting you're the one that needs the training.
0

and with one comment, the entire subeta userbase simultaniously dies from alcohol poisoning.
15

Soooooo, what are the right conditions?
0

So I guess that means that person in the battle forums was right...I'll remember that for next month...
1

Lindsay, how do you maintain perfectly purple hair? Do you just go to a salon? It never seems faded even though you're in the sun all day!
2

LINDSAY I DONT KNOW HOW TO MANAGE THE SHOP
14