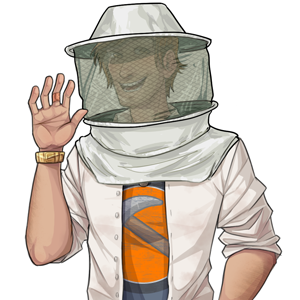 Well, kids, we're really getting to learn about nature here, and what we're learning is that a nice dark crypt full of spiders is weirdly safer than a brightly lit, open-air, sunshine-filled cottage garden. I'm heading out of this green wonderland over to somewhere a bit more predictable in its monstrosity.

Come find me for your next friendly battle to test your skills before we take on the next legendary pets. Yes, that's plural. Some wild creatures don't hang out solo.

How to Unlock: Random event while visiting Centropolis.
Loot
Win 5

@Holden Well, the reason it hasn't been changed yet is because a certain house that serves tea has been delayed for so long since both of those were part of a vote that the new map came last in.

Seriously though, I really hope that the Tea House is released as soon as it's ready rather than being held back yet another year just so it can be "on theme" for next Vesnali. Unless it's still not ready by then.
1

Wowow @ the art for Centropolis West Side.

Takes me back to a more innocent time in my life.
7

I found him at the Survival Memorial. At least my pet can battle him this time. :stuck_out_tongue:
1

Things that are still objectively hilarious: the way I go "ME?!?" every time we get a new Blake to fight.

Also I can beat this one too so my battlepet is probably equally confused.
2

I should have put "Best Live Ammo".
0

So I got him and didn't even know it until I went to check battles. :D
0

Loved this one, thanks!
0

oh my gosh, the loot includes a city background! I've been wanting more of those forever, and this one is gorgeous!
4

The "Bees?" card is my favourite cards against humanity card together with "Spaghetti? again?"
6

So this was a first in terms of mistakes. I had forgotten to add his weapons after putting their stats on them. It's always the first thing I do, too! So that has been fixed. Enjoy the easy wins beforehand :P
15

THANK YOU for making a easy challanger
2

@Amber Beekeeper Blake has no attacks. Unless he is representing harmless stingless bees this is a glitch
0

Quick question about how the battle played out since I'm a little confused??
Spoiler (click here to toggle)
He didn't do *anything* against my pet in the 5 battles I had--like he consistently dealt 0 damage and had no healing, and there wasn't any flavor text for his actions. Is he supposed to be literally this easy lol
3

Thank you so much! An easy one for once!
0

Well, I think we all know which pet this is going to be(e). Wait, more than one? It's a swarm?

I'm normally rubbish at figuring these out but I actually got it in one this time. xD Yay!
1

Ahahahahahah you win the internet.
1

On my way! to fight the bumbus queen in the blue building
0

@Muerte blake was prepared for bees, not the trash. blake will not survive
6

A part of me wants all of the bee/bumbi stuff to be a distraction from the actual legendary, the Trash Pandas.
7

Got him as well
By refreshing in the Lower West Side.
5

GOT IT
Got it in Centropolis
0

Comments are currently on a short cache, meaning your comment may take a few minutes to show up after you post it.