Aria Quin has a minion!

After a full day of classes and an evening full of studying, Aria finally had some time to read from one of her favorite novelists, a witch named Ermaline Wakefield. Ermaline had a whole slew of books in her latest series about magical creatures. Aria loved these books because of the witches' use of both creatures from the wizarding world and boring creatures from the muggle world. Aria loved imagining the two types of creatures interacting with one another and often imagined very funny interactions of the two. She flipped open the most recent book she'd been able to get her hands on titled, 'Inner Light' and began reading. Thus far she'd uncovered that the story took place in a thick almost overgrown forest and featured a foal centaur.

"...the light burst from Mintok's hand followed its own path through the air until it settled behind a tree. The young foal, Mintok, raced after the light and followed it from one tree to another. After several long minutes of chasing the strange light, it landed upon the ground beside a rather large tree and took the form of an otter. Mintok stared in shock at the creature. "Where did you come from?" She asked it innocently. The otter merely looked at her and nodded its head causing glimmering motes of white flecks to bounce off of it’s fur. Suddenly, the otter took a flying leap through the air directly towards Mintok --"

Aria suddenly stopped reading because she felt a heavy weight on her head. "Dax! Get off my head you silly griffin!" She shook him off easily. Luckily he'd been half perched on the back of the large arm chair she'd been reclining in, because he was heavy. "What is wrong with you. Can't you see I'm reading?" Aria asked in an half-exasperated tone. She shook her head as Dax continued on, jumping off her lap without even caring that he'd interrupted her peaceful reading.

Picking up the book once more, she began reading without comprehending the words. Aria was fully distracted by Dax, who she could see out of the corner of her eye staring intently through the doorway into the darkness of the hall. A sudden chill went down Aria’s spine as she stopped focusing on Dax and began to widen her senses. Her breathing stilled and she sat in tense silence while straining her ears to hear what was surely not there. The barest hint of a whisper trickled in from the darkness.

In an instant Aria reached toward her side and gripped her wand, aiming it in the direction of the hallway. She produced a light which was swallowed up in the darkness enshrouding the room. The darkness grew ever deeper and wider, as it seemed to unfold itself along the walls and floor on which she now stood.

“Dax back up!” Aria exclaimed softly. The small snowy owl griffin obeyed, slowly retreating to her side. At the same time Aria waved her wand frantically trying to produce her patronus. She’d only ever managed it once before.

The dark entity had almost entirely cloaked the room. The light from the fire in the hearth was vanquished and an eerie silence pervaded the space.

“Get ready to run, Dax.” Aria whispered as she shut her eyes tightly and focused all her energy on creating her last chance for escape from this unknown being: her patronus. From the dark, a hollow whisper formed the sound of Aria’s name, “Arriiia. I have come.” The ghostly voice dripped off the ceiling and seemed to pool in her ears in the most unnatural way. The inky wetness had moved closer, now she could feel it pressing up against her as she desperately fought for escape.

“I don’t know who you are but I am not yours!” She exclaimed while waving her wand in one final desperate attempt. A white light burst forth, sending a stream of energy zipping around her body. The conjured patronus had taken a corporeal form for the first time. The bright fox bounded around Aria and then led the path from the room and down the hallway.

The darkness inside the room seemed to vaporize with an agonizing tearing sound. “I am coming for yooou, Arrriia,” the voice hissed from the darkness as it was seared from reality by the light of her fox patronus.

Aria and Dax continued running until her fox patrons stopped, turned, and flicked out of existence.

[What will happen to Aria and Dax? Will she find out who or what has come for her? Stay tuned for the next installment to find out.] 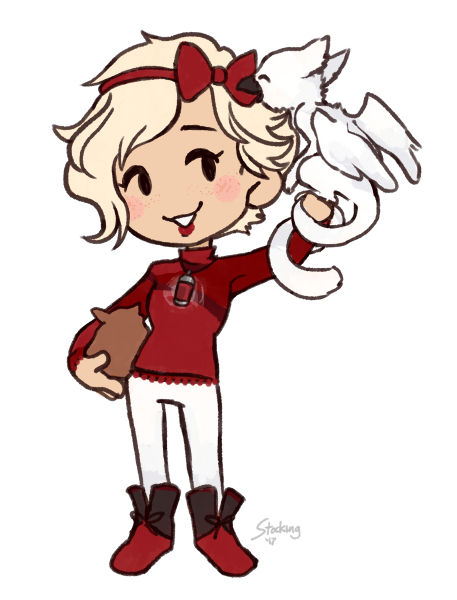 Look For The Helpers

A Garden Full of Fairies

Poems of Light and Warmth

The Perplexing Properties of Shadowglen Pumpkins

101 Ways to Bribe the Old Wizard

How Not to Be Drowned by Your Storm Pets

Mystical Creatures And Where To Find Them