Coira has a minion!

"Maybe this time tomorrow
The rain will cease to follow,
And the mist will fade into one more today
Something somewhere out there keeps calling me...

Am I going home?
Will I hear someone singing solace to the silent moon?" 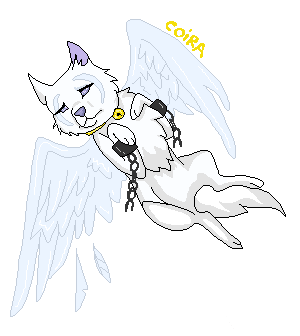 Coira opened her eyes slowly. The moon light coming from the window of that room felt soothing to her, as she was starting to get back her senses. She was shackled, her ankles far apart and her wrists spread wide above her head. She could feel the cold from the stone wall behind her rear for her clothes were nowhere to be seen. A bulky figure appeared out of the shadows on the corner of the room that not only felt like it but was, most certain, a dungeon of some sort.
"W-what... what is this... ?", her voice was weak and that was all she got for the stranger.
It took some time for the shadowy figure to reply. "This is your world. I'm your only world.".

As she was regaining her strenght, she strained and twisted in hopes of getting free from the shackles, while the man just stood there in silence, observing and admiring her every move. In fact he seemed delighted. Why, why was she chained and where was she. She struggled for a little while, and then gave up to her aching body. She could remember.

Coira was a very beautiful but even more innocent and naive Kumos. It was a funny thing to think about, seeing how well heaven was guarded and that its light was so bright and infinite that no nightmare could get in, no evil could step inside it without burning in agony. There was that little trouble in shape of an angel, yes, that same one who had already gotten in so many dangerous situations, that was walking too near to the gates again, and as instructed she went there to take him back to the rest, to the flock of angels. They all took care of each other there, the angelic society was much superior than the others, and she had already done it a few times that same week. But as she approached the blue angel, she stared into the darkness of an empty stare — and passed out.

And there she was, awaken at a strange place with the most fearsome creature she could ever wish to lay eyes on. "Coira,", he gave a deep sigh, and Coira grew afraid. "Wait, wait, my lovely one,", he whispered as he drew closer and closer to her, kneeling in front of her so his hand could caress her cheek. Her face was perfect to him. "You don't know me, but I've known you for a long time now. I've watched you every day since your arrival in Heaven, and from that moment I knew for sure you were mine to keep. I claimed you, and you are mine now".
Coira was stunned, her bosom heaving in anxious breath. Her pale face was burning and now the dark stranger laughed, lifting her face because she kept trying to look away. "I'm your master now," he said, "and that is how you will address me, and that is why you will obey me". She looked up at him steadily, her cheeks suffused with a raw blush, and with the most devious smile, she draw neared and opened her mouth with his lips and tongue as tears spilled down her face. 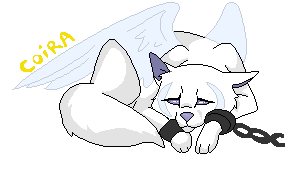 It had been a while now since her capture. Coira was taught to obey and do as her master desired so she would always please him no matter what situation, whether painful or humiliating. Her crying was constant as well as her blushing and punishment. He would spank her and force himself into what he would call innocent beauty, and in everyday she would pray and hope for her angel friends to come and save her from that enslavement, but they never came.
Until one day the hopeful praying stopped.

"My master", she whispered to herself. Time was a distant theory and it didn't matter neither to him nor to her, not knowing some centuries had passed. She felt some change in her heart which she did not fully understand. Yet she was afraid as always. The day he gathered her into his arms, gentle for the first time.
"Kiss me as if you desired to kiss me", and overjoyed she kissed the cold smoothness of his lips. That was when the window clicked behind them. And her nightmare turned to it, grabbing her by the shoulders to put her protectively behind him, his biggest treasure in all his existence. Her prayers had been heard and, for once, answered.

"No, no, NO"! She could feel her heart racing and raging, the pounding was unbearable as well as the throbbing that overcame her body. Her shining light blinded her rescuers to fainting, but she did not have the courage to turn back to her captor and see what was of it. She could only feel the tears heavily rolling from her eyes, the sobbing pressing her chest as if she could not breath anymore.
Turning back to her captor's body, she let out the highest scream she had the capacity to bear. And whoever around would swear that to be the most dreadful sound they ever heard.

"Am I alone?
Is somebody there beyond these heavy aching feet?
Still the road keeps on telling me to go on,
Something is pulling me...
I feel the gravity of it all."

OctoSquid;
Story and art by me (

Marul
Please go! You're in danger! Yorshka
Why are you here? Go home, be safe. Calduch
I miss you all. But you need to let me go.