"Today I woke feeling lovely,
Happiness overflowin' knowin' somebody loves me
Just think yesterday I was down and out ,
Now there´s not a single thing for me to frown about
And the same thing can happen to you,
Smiling so hard my mouth look like a capital U!" 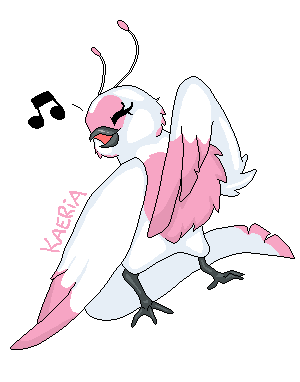 Kaeria lives in the pink-colored world she has always dreamed of living. She faithfully believes that hearts should always be heard and that dreams should always be followed, and she made this her very own philosophy of life.
When still mortal, she had a very difficult life. She didn't have a family, being an orphan since she emerged from the solitary egg in which she was born, and she fought every day for her life always with a smile on her face and so grateful for being alive. Because of this, she carries the humility and goodness of spirit firm in her tiny heart, and for having suffered all that she has suffered in another life, nowadays she has a mission more than honorable and deserved: She spreads love among mortals.
Kaeria is, in fact, a small package filled with the purest love. It does not discriminate species, color, size or anything of the kind. She says that she can see the love within each one and it is by this criterion that she judges the people, but everyone knows that it is not true. After all, she never judged anyone. 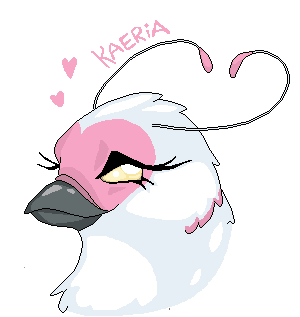 Well, let's be honest now. For her own protection, she never left the gates of paradise, for she could concentrate and send waves of love from above. But then, when the gates opened in the inevitable chaos, she was caught off guard and fell — it was too long since the last time she actually used her wings. And when she did, Kaeria for the first and last time in all her existence, hurt another being. A little Zasaba flying low through a field of flowers never saw what struck it.
Seeing what she had just done, in a moment of despair, she had an idea: she brought the insect back to life, but as she was merely an angel and not a creator, she could only do it by sharing a bit of her essence with that being, so that when it woke up again it was no longer a Zasaba, but instead, a lovely little Lain, as pink as some of Kaeria's feathers. The new bird had no memory at all, and seeing the opportunity in it, Kaeria adopted it and taught everything she knew to the new being — it was a bit difficult to teach them to fly when she had forgotten it herself but eventually they both learned. And because Kaeria was a cupid, she gave her new child a purpose of its own too, to go around and mend broken hearts, fly the skies to bring a rain of love onto every living thing, and turn every frown upside down.
You see, both their stories may have started wrong. But in the end, they found beauty in life — and the world would benefit greatly from the pair of souls!

"Your heart deserves your trust,
A choice made by all of us;
The sun will come back tomorrow,
There´s a message in the bottle
So come on, I´ll meet you there
There´s enough sunshine to share
As long as you know
The bridge between us is a rainbow!"

redteam;
Story and art by me (

I Love You Kumos Plushie

My Life with Five Daughters

I Love You Puppy Yorshka
We'll find him, I promise! Korax
At least you are safe now. Diederich
Hey, no need to be afraid! Serona
Oh, you're so pretty! Zamorak
Um, I'll see what I can do?

Nastrond
Stay away from us. Diabla
I can help you. Please listen! Sodra
We need to hurry up now! Svetta
How about pay in food?