A shady businessman awaits you in this dark alley... What could he have to offer today?

If you purchase an item and within 10 days the price changes, file a ticket here to get the difference in CSC.
Note: we will not be matching prices for items purchased prior to the Black Friday sale.

We are excited to announce a new-and-improved CW system for you to enjoy! Head over there to browse Custom Wearable Shops or to create your own Custom Wearables! Remember fire safety when handling hot items like molten lava or this new collection from the Cash Shop!

You can also purchase one of our older November Donation Presents or Collections!

You have until the next monthly collection is released to get these challenger summoners from the Cash Shop. They are were all released in November of previous years. Note: The Deciduous Summoning Charm is an Autumn based challenger and will stick around September, October, and November.
November 3, 2022 - [ Go to the news post ]

Are you still deciding on what to dress up as for this Morostide? Maybe one of these new makeup kits from the Morostide Makeup Case will help. 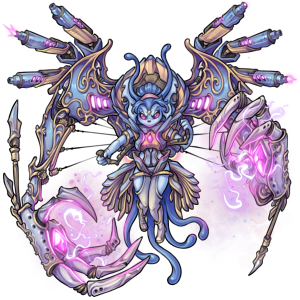 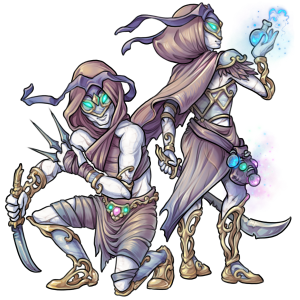 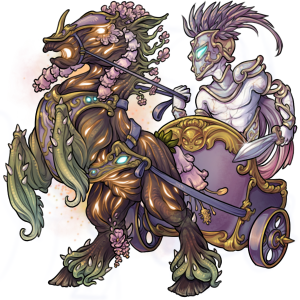 You find yourself climbing the marble staircases of Shinwa's temple with the rest of the previously possessed (well, sans Maleria, of course.) Esther has been trying for months to gain an audience with Shinwa and warn her of Princess Liara's challenge. Across the dunes, you can see the shifting shapes of an automaton army drawing near. No doubt the goddess is already aware of the threat and has been busy preparing a response. She's probably amassed a formidable force of her own! You can't wait to see what an actual goddess has at her disposal.

A temple attendant ushers you all up onto a grand marble balcony. Shinwa is waiting for you, a pained smile on her face. After greetings and introductions, Esther recounts everything: the possessions, the monstrous creations, the mysterious identity of the tormentor, and finally, Princess Liara's justifications for her entire rampage. Shinwa silently considers the entire tale.

"So many people suffering... and all of it just to get back at me," the goddess says quietly.

"But Liara is lying, right?" Victoria asks, "You didn't just boot her out for no reason."

"Does it matter? I sensed a petty tyrant with great power and little compassion, and I wanted to act before that power grew out of control. She certainly wouldn't consider it fair."

"Ah," Vanya chimes in, "having that angry voice filling my head with such thoughts, I am thinking you did ze right thing." The rest of the group nods as Shinwa walks over to the balcony rail.

"I thought so, too," she replies, "Yet I have spent years doing ‘the right thing,' and every time other people suffer anyway, sometimes even more than if I'd never intervened at all," Shinwa leans on the balustrade and hangs her head, "I am exiled to this planet because I ‘did the right thing.'"

The goddess looks out at the desert and the approaching army before sighing heavily. Without glancing up at the group, she turns and heads back into her temple. The great stone doors rumble as they begin to close behind her.

Confusion washes over the group. A few people begin to protest, willing to fight on the goddess's behalf. Shinwa turns to face them.

Everyone glances around at each other, not sure what to do. Before you can say anything, though, tiny shards begin to rain down, embedding themselves in the stone temple floor. You pick up the Possessed Diamond Shards at your feet. Liara is here, and she's ready to finish this fight.

Note: The Possessed Diamond Shards from the Cash Shop unlocks all three challengers.
October 12, 2022 - [ Go to the news post ]

It's what some people would call Spooky time. The Cash Shop has decided to take a spin at making spooky in sweet, deadly pastel colors.

You can also purchase one of our older October Donation Presents or Collections!

You have until the next monthly collection is released to get these challenger summoners from the Cash Shop. They are were all released in September of previous years. Note: The Deciduous Summoning Charm is an Autumn based challenger and will stick around September, October, and November.
October 3, 2022 - [ Go to the news post ]

Try not to think too hard about the terrifying nature of these new bottles from the Cash Shop.
September 29, 2022 - [ Go to the news post ]