Chase has a minion! 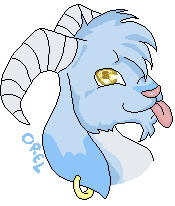 Orel is a trickster. Ever since he got to heaven, he knew it was not where he belonged. All his life he liked to play tricks on people, mock everything and everyone, and he always got away with anything. Inside paradise was no different; he had a lot of fun with the other angels, at their expense, of course, and did not take much of anything seriously.
"Now that I'm dead 'n gone, well, I'm untouchable," he thought to himself. "If I go back down on solid ground, imagine how much I can do!"
But being the naughty Orel he was, of course his escape would not be simple and unharmed - to the others at least. Several were the days when he approached the main gate, the only one, and studied every detail, his agile mind devising alternatives to a perfect escape, with who knows the added to leave a joke behind, a conundrum, who knows what kind of pranks were roaming around inside his creative, yet devilish, mind.
It was during one of those walks, which had already been forbidden for him in several sermons about how dangerous it was for an angel to expose himself without the protection of the group near the gate, that he encountered a shadowy creature on the prowl.
"Come close. Come, let's talk..."

Little did Orel know that a war was coming, and all the gaming would give way to a war. 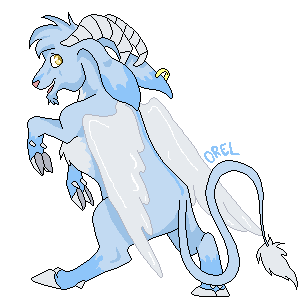 The stranger in the shadow had a proposal, an exchange that would be nothing more than fair - after all, now, freedom is priceless and worth every breath. The shadowy figure wanted her, the guardian of the gate, responsible for every minute to fetch Orel from the edge of paradise to bring him to the group, that annoying angel that came with this and that sermon on discipline and order and all that jibberish.
"Fair enough," was his reply, "that way I will not only be free from this tedious place, I'll also get rid of that pesky one". And, carelessly, he accepted the deal and had the shadowy figure walk him through the escape plan. Little did he know, the consequences would be devastating.

The agreement stretched its claws towards the gates of paradise a few days later, when Orel displicently tricked the watcher to steal the keys and unlock the door. "As easy as taking candy from a kid...", he'd laugh to himself, so proud about not only his habilities but also for being so clever. Who couldn't he outsmart? Huh, silly angels. And when the shadows broke into the defences of paradise and raided the land, he quickly set foot off heavens, running away in his great momentum. Well he thought it was all going so well, but he shouldn't have looked over his shoulder. That way he wouldn't have witnessed as the angels were slaughtered, the shadows grew bigger and the war took over what once was such a peaceful place. He felt himself freeze for a moment, as his whole expression twisted in agony. What did he just do? He didn't belong there, sure, he could feel it. But it didn't mean he had to cause that much suffering. "I'm... I'm a monster.", he told himself, and this time he meant it.
Orel dived from heavens as tears filled his eyes, so many tears he could barely see anything in front of him. He let the sky take over for him, and just stood there letting gravity pull him down. As he was falling, the image of heaven cracking down was becoming more and more blurry. And for the first time in his life, the trickster felt guilty. Now it doesn't matter how many fancy items he can get his paws on, nor how many idiots will fall for his pranks. That memory haunts him for life, and he feels too ashamed to ever go back to heaven and look for his brothers and sisters in their eyes. Orel wanders, hiding from sight, and as he wishes there was something he could do, he doesn't know someone is out there, looking for him.

I hope the roof flies off and we get blown up into space
I always make such expensive mistakes..."

Adopted from User not found: earthling;
Story and art by me (