Marul has a minion!

"It’s like a dream, or some silly fantasy
I want to live in, waiting just for you;
I’d trade my soul or my weight in gold
To have a smile here, that was my own..." 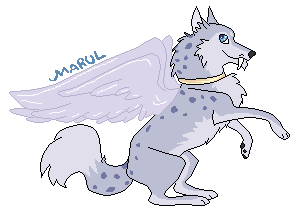 Marul is one of the best behaved angels up there in Heaven, reason why there are many who will consider him as their leader. It's no wonder why the handsome Telenine got all this affection towards him, for he is chivalrous, unafraid and daring. He is there to solve any problem even if it means putting himself at risk — he did became an angel younger than it was expected, but being giving was a part of him.
Not being much of a deep thinker sure did had its advantage, for he would not hesitate for a bit before going for a rescue, he didn't have to think about it.
Probably the reason, too, that he got himself in the biggest journey of his life.

He was a watcher. He'd keep the angels gathered around so they were safe, all inside the gates, making sure they were all at peace. There was always the chance one could venture too far, or fall beyond their reach. And others who could, on purpose, bring hell to their piece of paradise — but I mean, who would do that? It was purely theoretical, a far away possiblity, utopic even, until it happened. He was meant to be prepared for that, sure, but when living in such a peaceful and beautiful garden of soft clouds and velvet feathers everywhere, one could really get used to taking a nap here or there and dream about herding large groups of Devontis.

When war happened, Marul fought bravely to keep their home under control. Being one of the best warriors, he sure did a lot to protect his brothers and sisters. For above all he's fierce and willing to sacrifice himself even for the sake of other beings, and that fills his heart with the brighest light one can imagine — that's what makes him strong. But the gates were ripped open, the fear was spreading amongst some younger angels and the devoted guardian could not help but watch as many other angels fell from the gates or were engulfed by the shadow creep surrounding their piece of heaven. 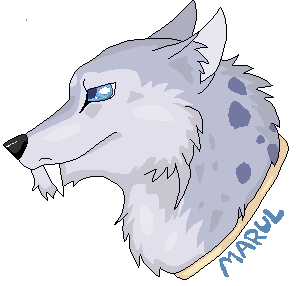 Marul fears nothing, this bit is true. His heart speaks louder than any thought, any fear, and it is because of his powerful heart that he is fueled up to go and fight. The war had reached its ending, but the Telenine found no peace in himself. No matter what everyone would say, despite all that happened, he would blame himself for the trickster's malice and how did he miss Orel in his scoutings, how he let the others fall and why wasn't him able to protect them. He made a promise to himself and he would not rest until he found each and everyone that fell from the skyes that dreadful day, no matter the dangers he will come across, all evil he may find along his path. He is sure in his heart that he will be able to spread the light not only for those he is looking for, but also to every other being that may be in need.
Marul will roam the skyes and the solid grounds in search of every angel that might be in danger, fallen from safety, and he won't return home until he's rescued them all. He has no clue, destiny's got a plan for him already.

"Yet another night I’m alone,
With no home, I’m here without you;
I’ll search ‘till you’re found,
I’ll be down in the starscrap..."
— — —
Adopted from

OctoSquid as Angeli;
Story and art by me ( Coira
I'm coming to rescue you!

Calduch
What are you doing here?!

Kaeria
This isn't safe, go back! Orel
YOU! I've been looking for you. Yorshka
Come with me, please listen. Rancora
Let me help you. Ivor
I can take the pain away. Nastrond
Light is with me. Stay back! Diabla
Ew! What is this thing? Minte
Oh! Are you lost? Farragut
I can hel- My WHAT? Calibur
This is where it ends.