Acid is in the Hunter 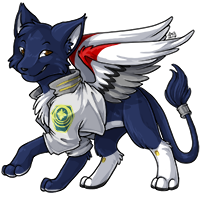 I'm a hero. That's what I do. If someone's in trouble, I'll be there. That's a promise!

It's hard to keep a promise like that, from all the way up here. I'm looking down at all my friends... It seems like so long ago that we were all together, encouraging each other to do our best. But now, I'm up here, and they're still...

I like to think I'm still with them, in a way. When they think about me, I can feel it. Like a little spark in my chest that catches my attention, and I'm able to look down and see them. They're all doing so well. I'm proud of them.

Even without me, they're strong. Because of the role I played in their lives, they're moving on with their heads a little higher. That's the kind of stuff I try to focus on.

It really was great. I was the first man-made Wave Change in existence... Well, Acid and I. Together, we were Acid Ace, and we were unstoppable! ...Sure, we had some speed bumps. Like how the combination was slowly killing me. But hey, it happens. Sacrifices gotta be made, yeah? For science, for the future, for all that! To be a hero, you gotta sacrifice stuff!

And sometimes that "stuff" winds up beind your whole darn self. But it's okay. All my friends wound up safe and sound, and they had the courage to keep going. I don't know that I would have. So really, they all surpassed me. I protected them for as long as I could, and with one final push, they went past me.

I don't feel sad about it. In fact, I feel pretty much alright! Up here... there's more for me to do. You'd think everything was "over", but you'd be super wrong! There's plenty more people up here, in this next place, that need protecting and confidence. I can help with both, I'm sure. One thing I've never lacked - confidence!

I miss them. They miss me. It hurts, but I think I can handle it. I may not be down there in that world anymore, but that doesn't mean I gotta stop doing the only thing I know.

...But okay, I do have one complaint about this place. There's no Mega Snacks! W-what am I supposed to do without my favorite snack...? A-anyone? Geo Stelar
Never give up. Sonia Strumm
Can you please write, "To A.C.", too? Tia
Don't forget to smile and eat lots of chocolate. Spartacus
Aren't you always glued to your sister by the hip? Acid
How about we go buck wild for once!? King
You no longer have your most powerful card! Joker
You're no brother of his. Luna Platz
Be careful next time.