Skeptic Frostclaw has a minion! 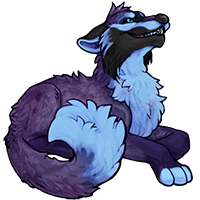 Skeptical scrutiny is the means,
in both science and religion,
by which deep thoughts can be winnowed
from deep nonsense.
~Carl Sagan~

I trust everyone. It's the devil
inside of them I don't trust.
~John Bridger~(Donald Sutherland)
The Italian Job (2003)
It comes of being born gullible. As a cub, I took the word of any mature tigrean as law, even when what they said didn't make a great deal of sense. I let the older cubs in the village lead me to all sorts of mischief, only to take the fall when they vanished into all the best hiding spots, leaving only me standing over a broken vase or trampled garden. My mother would growl over me every night, swearing my older brothers and sisters had never given her so much trouble.

I must have resolved to walk away from my group of friends a hundred times. On every occasion they sweet-talked me into taking part in their next misguided adventure.

I was losing my baby fur and starting on my first growth spurt when the traveling professor came through our village. Her name was Octaviana Creamclaw and she was an archan even more formidable than my father, the tigrean that had once won an underwater wrestling match with a full-grown tutani.

The other cubs ignored the offered lessons and I was hardly one to go against the group. Hide and seek was Sedgetail's idea. She draped that ridiculously long tail over my eyes as a warning not to peek while I counted to fifty.

The priggle family was having lunch in their burrow at the time. The priggle triplets had worked for hours to build a giant snow priggle with pine cone spines. My friends managed to destroy that work of art in less than five mintues. The sound of snapping branches and crushed cones was odd as we were nowhere near the forest but I was only in the mid-thirties and I had promised not to peek.

I opened my eyes at last, dismayed at the sight of the destruction. I started to whimper, sure the blame would fall on me again. It's not as if I was afraid of a few puny priggles, but an angry mob of priggles could do some real damage with all those quills.

The professor hailed me, beckoning me over with a wave of her tail. She asked me why I continued to stay with such a bad group of friends.

"They're the only friends I have, Miss Creamclaw. Besides, I'm sure they didn't mean to knock over the snow critter. They were just looking for good places to hide."

"They use you for a decoy, Snowfur. You must learn not to always take what others say at face value."

I was so embarrassed, but I had to ask what a decoy was. When she explained, heat beneath my skin made the fur on my back bristle. I had never felt such anger. How many times had I been used for believing too readily? Under the watchful eye of Miss Creamclaw, I learned to question everyone and everything. I would never be taken for a fool again.

Taking a temporary holiday position with Melody saved me from becoming as extreme a hermit as I had once been a follower. I was still mistrustful, but I could deal with other Subetans in a meaningful way. A friend of mine on the toy assembly line introduced me to a few of Subeta's greatest authors, awakening a love of books I'd never known before. I like to think I have a collection that rivals Alexander's, though I am always on the lookout for rare books. Terise is still a friend, one of the few I willingly invite to the log cabin just one block from Melody's own home. I stay there in the warmer months, though I prefer the seclusion of my secondary home in the mountains, a cozy cave in which I can take stock of knowledge gathered through Sagecraft and escape the bustle of Luminaire.

My friends have all taken to calling me Skeptic. Skeptic Frostclaw, the tigrean that must categorize and analyze every new piece of information before she will ever except it as fact. They know the line they can expect when they come to me with some supposed medical or scientific breakthrough.

"That's about as likely as a snowstorm in Darkside!"

Imagine my utter astonishment when extreme weather patterns left the smoky red mountains coated in white! My friend Galestrom works for the Subetan Meteorlogical Survey Team. She was good enough to invite me to witness the wonder of smoke and snowflakes mingling in Darkside's hazy streets. When my favored phrase escapes my lips in her presence, she always laughs.

"There must be a copy of your "A Snowstorm in Darkside" in every house in Subeta by now, Skeptic. Thousands of Subetans recount your experience every day. Surely the odds against what I'm saying are better than one in a thousand."

As once in a lifetime is by no means statistical evidence of favorable odds, I am always willing and eager to dispute the point. Books are marvelous, but living through the descriptions of the author is not the same as experiencing the wonder of a snowfall in Darkside.

Cloesly tied to my love for ferreting out the truth is my love for Sagecrafting. Attaining the rank of Sage of Information took years of intensive study and many failed trades that left me with meager fact lines where I had given up whole paragraphs of knowledge. I spent many a restless night tossing and turning over the fallout from a bad trade.

A sagecrafter trades bits of knowledge as a merchant deals in material wares. Our interest may be captured by a stone etched with ancient ruins, a parchment scroll with pictures of uncommon constellations, or even a recitation of a legend known only among a select few native tribes of the Omen Islands.

My own stores of knowledge are vast and varied. It takes something special and highly unique to spark my interest in a trade. I can tell you the secrets to capture the light of the moon but in return you must show me how not to be burnt by the sun. This is a saying favored among Sages, though its original form is three simple ruins that are pronounced Nol Tak Gui. It is a shame such simple languages no longer suit the needs of our complex society. They saved a great deal of writing time.

There are those foolish enough to try to cheat a sage. Some of these are forgiven for inexperience or ignorance. A child that wishes for the secret spell of vast riches in exchange for the secrets of their older sister's diary will get a laugh and a pat on the head, maybe even a handful of coins.

On the other hand, there are those that try to deceive. Lie to me intentionally or try to mislead me in any way and you will find yourself with a lifelong banishment from the Sage Market. It is a shameful fate as there are many beautiful wares for purchase, many designed in the course of dreams.

I am perhaps Subeta's greatest living expert on laws both past and present. I suppose it will come as no great surprise that the community of Arctic Frost has asked me to serve as a judge on more informal matters. I leave the criminal cases to the permanent judges of the Kumos Patrol Circuit but when it comes to matters of coin and the heart, I always have an open ear. For a modest stipend of a few thousand a year, I take my place on the bench in a flowing black robe that is bulky, heavy and altogether uncomfortable in order to resolve disputes that have gone on for anywhere from days to months.

Many in my position see it as proper to limit their time to those select few cases involving Subetans of wealth or great popularity. This is not my way.

I will hear cases in the street, the Gift Center, or even at the Mystery Box when two Subetans make a lunge for the same item. I will preside over accusations of snowball fraud and claims of vanishing Mysterious Melody partners. I do not require parties to dress in suits and dresses or to jump through a dozen hoops in order to receive a judicial decision. I do, however, require them to sign a paper to the effect that my decision will be accepted as final by both parties. These documents may be in the form of formal contracts or scribbles on a paper napkin. As long as both parties willingly sign their name, I will hear both sides and state my decision. I will not entertain arguments that chibi pets are too immature or that graveyard pets are lacking in brains due to their choice of potion - quite the opposite is often true.

Nyani, my minion the Niakko, is of great use to me both in the courtroom and in street cases. She is an ideal clerk capable of noting every detail of what is said and arranging incoming evidence with a few quick flicks of her claws. She prefers to drape around my neck while the parties present their arguments.

When the day's case load has been resolved or set aside for further consideration, she is always able to beat me home. Her keen eye for numbers is highly beneficial to a Sage and she can smell dishonesty on a visitor as easily as you might smell the aroma of a fine stew when you come in out of the cold. Prime among her talents is her ability to cook. Since Nyani came into my life, I have never once suffered the indignity of eating out of a can.

Auction Gavel
The Day the Darkside Froze Over

Betamorphs Set
Eye of the Tigrean

Baby Its Cold Outside

Autobiography of a Snowflake