Gutter Rat has a minion!

"You're a hell of a lot bigger than me. You make me look tiny," Gutter laughed. "You need a better name than that."
They both sat quietly for a moment, before Gutter spoke up.
"You smell trashy. How about Trashy? Sounds kinda tough. In the streets your name said everything."
Tee looked confused "How is that tough? I'm sorry but I grew up in the woods, I don't know about the streets."
"It's dirty, it kinda implies that you, uh, don't play clean. Yeah, you play dirty, and tough guys play dirty."
"Really?"
"Yeah! You were the runt right? Why not leave that behind and be a tough guy?"
"Trashy it is then!"
They both smiled at each other and began to eat.
~
Gutter and Trashy became best friends after that moment. They traveled all over from city to suburb to forest and back again.

Credits
Profile by Me
Sewer images © Subeta
Art
X by

Oatmeal
X by User not found: mcbeast
X by 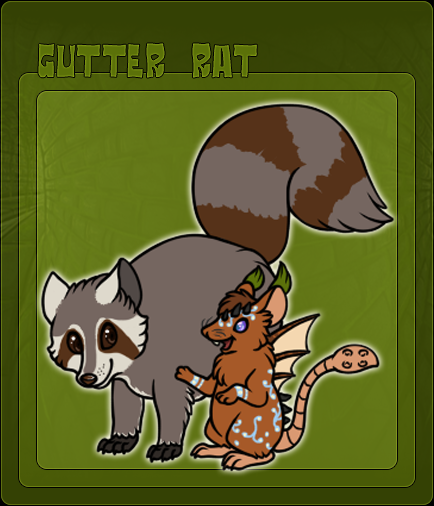