Recoleta has a minion!

Recoleta was nothing more than a common stray, no one even seemed to be able to notice him whether he was trying to sneak or not.

If not just a little bit mad, Recoleta found most of his time spent hunting outside of a out of town insane asylum. This is where he became fond of a young lady named Salina. He spent many nights sneaking in to watch her sleep, strapped into her bed all nice and tight. He debated whether or not to chew through her restraints, but he figured that if he did, she would get in trouble. Instead he spent the nights with her until he was comfortable enough to let her waking eyes see him.

They quickly became something akin to friends and he would do his best to sneak in and visit her as often as possible. It was easy for him to do because no one paid attention to him, but he was still careful.

But one day, while approaching the asylum for one of his nightly visits, he noticed some of the white coats dumping her body into a hidden pit. That was worse than throwing her into an unmarked grave! His heart sank and his eyes burned with anger, but he quickly contained his rage and ran away.

He found his way to a graveyard, a silent library of the dead, and it was there that he turned his rage of Salina’s death into a new focus. Recoleta vowed to give every living thing that he came into contact with a proper burial. Salina suffered such a unmarked and humiliated death and he wanted to spare that pain for any one that he was able to help.

So he began taking bodies and displaying them in some abandon tunnels below the asylum. They were dark and hid his intentions well enough that he could almost freely move in and out of the tunnels with no one noticing him. He watches over the dead bodies now, caring for them for them as best he could. Spending a little time each and every day talking to Salina as if she was still there. 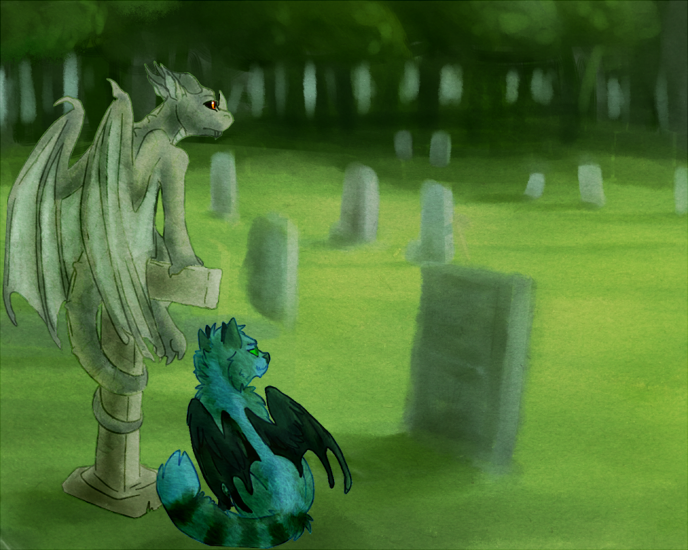 An old friend. He's so lonely... But I will stay with him as long as body remains.

The weary traveler. Another lost soul. One dug up from the earth. I am not used to the bodies of the dead walking around.

The Demon... I grow tired of tending to the bodies he leaves.

Lea.
Overlay by
Background Textures by ShhMaker and Layout by

Chance♥♥♥♥♥
Background Art by Lynn
back