Partido has a minion! 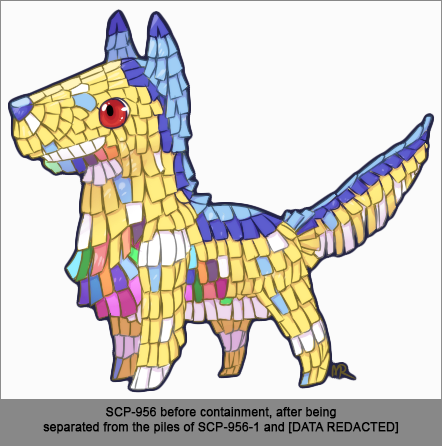 Special Containment Procedures: When active, Scp-956 (Partido) is to be kept in the center of a 20 by 20 by 12 meter, padded concrete room. The door to the cell is to be locked at all times, with cameras posted in every corner of the room. All cameras are to be facing Partido at all times. Any movement from SCP-956 while in its active state is to be reported immediately. Permission to access Partido's room is to be cleared by BatFacedDog. Once permission is granted, all personal must be accompanied by at least one member of Level 4. All other access of Partido is prohibited unless for testing purposes.

In cases of containment breach while in an active state, all areas within 50 meters are to be locked down and scanned for traces of SCP-956. If Partido manages to escape the facility, recovery agents are to be dispersed immediately.

Description: Partido appears to be a common pinata, similar to the Candy Surprise and resembling that of a Nostalgic Kumos. Tests have revealed that, although similar in appearance to paper-mache, Partido is composed up of various amounts of paper, glue, candy, /////// and human tissue. Although it resembles an everyday pinata, SCP-956 seems to be unaffected by physical blows. Showing the ability to take more than ///////// of force before any damage to its body can be seen. Even though it appears to take the form of an average pinata, SCP-956 possesses the ability of speech and common locomotion expected of any normal quadruped. Along with the ability of movement and speech, Partido also has the ability to shift to bipedal means of transportation.

SCP-956's active state is triggered when a user comes within ////// feet of it. After a user enters Partido's active zone, it becomes hyper aware of the area and everything in it. The victim often finds themselves unable to move, though minimal speech can be heard. Once active, Partido will proceed to approach any and all users within its zone. From there, Partido will use one of many methods to transfer its bodily fluids to the victim. It will often bite, scratch, or attempt to cut the victim in attempts to transform them.

Once a victim has been physically attacked by SCP-956, it is impossible to stop its transformation, though the speed of the transformation varies depending on the damage done and the amount of fluid transferred. Though the average transformation rate is ///// minutes. From there, when the transformation is complete, all victims resemble a pinata form similar to that of Partido, yet similar in shape to their original body. Sometimes, it is common to see victims of SCP-956 leak small pieces of unidentified candy. These pieces of candy are to be referred to as SCP-956-1

Discovery: Partido was originally discovered in an abandoned house in the city of [DATA REDACTED]. Once transported to the SCP Foundation, Partido was put through several interviews. After several interrogations, it found that Partido originally came to be via a piece of candy from the original SCP-956 and consumed by [DATA REDACTED]. How Partido came across the candy is unknown. Means to find and retrieve any pieces of left over candy are to be discuss immediately.

All other means to extract any information of Partido's past have stopped until further notice. Even though it seems hesitant to talk about its past, Partido is more than willing to share stories of its new life and interests. It seems to be oddly fond of using others as its own pinata. Along with it disturbing thrill of harming others, Partido is often drawn towards parties. Often throwing celebrations for itself when alone. It is to be noted that SCP-956 often becomes enraged when party favors are not given in times of its personal celebrations. Permission to give SCP-956 party favors: GRANTED.

Layout and coding by User not found: hamada
Overlay by