Nii has a minion!

I.II.III.IV.V.
Dear reader/browser: Nii is a Ragnarok Online OC. Lore and story is strictly following Ragnarok Online location, jobs and minor characters in her story. Including events that happened in a private server (so pretty much RPized version of retelling her creation and my dawdling in game.) 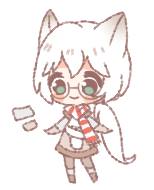 Goal: Get a scribble (modified) overlay...EVENTUALLY.
Get to tier 10. (6/10, three more tiers to go!)
Get her gears in her TC from RO.
Wrote a brief history about her. Kinda sloppy but good enough...? 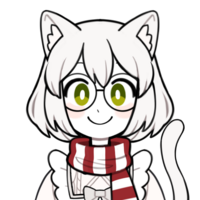 PS. Parents of Nii and her adoptive parent are in-game friends and in-game names of said individuals, same as Nii.

Nii was born to a Shura (Asura) and an Arch Bishop (Elizabeth) in Gonryun as Adelaide. Her parents' religious differences were obvious, however, the two had put the differences aside and lived peacefully in Gonryun to give birth to her. That peace didn't last long when her parents received a letter to pursue an MVP known as the Evil Snake Lord a year after she was born. Although, Elizabeth was very reluctant to go, this was an order directly from the Gonryun officials because of it's threat to both Hermits and adventurers venturing Arcadia, the dungeon of Gonryun. There were also other people gathered to explore the Arcadia. Sadly, months had become years and soon, it was decided that the expedition was a failure and Elizabeth and Asura were proclaimed dead.

Having no other relatives, the Hermits had no choice but had to take care of Nii. She was beloved by the Hermits and was raised with love and care. Her high-spirited and curious nature was drawn to the edge of the floating island. That curiosity led her to fall down and landed to the ocean. Since she was still a young child, she didn't know what to do as Gonryun had no any body of water and to learn how to swim. She struggled to get air but eventually passed out. Death was about to come but luckily, a crew of Malangdonian merchants (known as the Cat Hand Group) had spotted and dragged her to their boat and she was brought to Malangdo.

She was interrogated by the crew members. She couldn't remember a thing other than falling down from the sky. Puzzled, the captain decided to let her stay until she recovers. Her presence and her happy-go-lucky attitude had charmed the cat natives and eventually was adopted by a Cat Hand agent. She was then given the name (that soon she adapted all her life), Nii Felis.

Being raised by cats (and merchants at that), Nii had picked up the knack of trade and the art of bargaining. She also adapted their agility and senses as she trained with her adoptive father, Doram as a Novice. Most of the people would think she'll set off as a Merchant when she grows older. However, in her 8th birthday, Nii had ventured off to Izlude to become a Baby Swordsman. Usually, a child Novice who wishes to change jobs has to be accompanied by the parents to bestow a job class. Doram was at sea and couldn't go so persuading the Swordsman guild will be difficult. Her effort paid off as she manages to get the Guild's approval and became a Baby Swordsman.
Profile template by

Asunay for giving Nii back!

Thank you so much to all my Ragnarok Online friends! You are all the best.