Straff has a minion! 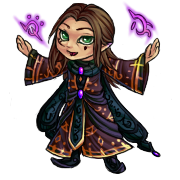 Hisan
Straff is the High Priest of Kratyr. He maintains the Chantry and anything relating to the religion in Kratyr. He is also in charge of giving punishments to those who break holy laws and such.
Straff's parents were Aramis and Sabelle. During war, Sabelle suffered a fatal injury. Aramis fled to the north, noticing that the war was indeed lost, and Straff was brought to Myrn by Reshka's father.

The Chantry of Kratyr is divided into three separate roles: the High Priest, Acolytes and Disciples. The High Priest is the overseer of the Chantry, and appoints the Acolytes to follow in their example by looking after the temples in the rest of the continent. There is an Acolyte in each temple. The Disciples are those who help out in the temples and are considered holy men or women. They are as devout as the rest of the clergymen yet they prefer to serve rather then lead. A High Priest and Acolyte cannot bear children or marry while a Disciple can. A married man can become a member of the Chantry however he cannot be raised higher then a Disciple. If an Acolyte or even the High Priest disobeys the Gods by partaking in adultery, alcoholism and anything going against the Chantry then he will be sentenced to punishment and stripped of all titles. If it is an Acolyte which disobeyed then the High Priest is in charge of judgement. If the High Priest himself is accused then it is brought forth to the king. The punishment for treason to the Chantry is complete strip of titles and lands and in some cases death.

Aramis
Juda is known as the lunar God of wind. The Quim are his creations. Their numbers are few and often times they are elusive to the outside realm but occassionally they become curious. Aramis was one of the latter. He ventured too close to Myrn and there he met Sabelle. At the time he had no idea of her position of Kratyr and what she meant to the people so he openly pursued her. She was the High Priestess of Kratyr : a religious figure and the emitomy of purity. The High Priestess is the highest position available in the Chantry and are considered "Pure" in every respect of the word. Aramis grew very fond of the woman and eventually she got pregnant with Straff. It caused a major scandal and once the truth of it came out, a civil war broke out. During the war, Straff was born but at a great cause. Sabelle was killed, leaving the child with Aramis. The Quim had no idea how to go about caring for a child and was at a complete loss. The king of Kratyr at that time had been close with Sabelle and gave Aramis an ultimatum: let him take the boy and raise him as his own or suffer for his crimes against the Chantry. Aramis, against his own wishes chose to let the regent take Straff. He then fled the city and lived in seclusion for a very long time. Straff never did get to know his father yet the old king treated him very well.
Artwork
Reference by

The Properties of Dragon Smoke Antonius
Oh have you changed.. Limn
I fear for the kingdom if it falls into your hands. Elianna
My lady, you are the light in this dark kingdom. Aramis
I do not believe you. Arebella
Your name is the only memory I have, mother.