Nakai has a minion! 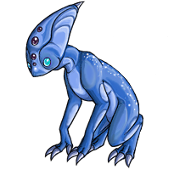 When humans hear the word "alien", the first things they think of are abduction, invasion and experiments. They are afraid of aliens because they are different, terrifying and unkind.

Nakai are one of those terrifying and unkind aliens. Highly interested in reasearch on living creatures, learning about their physiology and their language, the Nakai methods are unconventional, but at least they produce the best results.

Though one has to know that his species hasn't always been that cruel. Once a peaceful species living on a planet consisting mainly of water they never had any intentions of exploring space and much less interest in war and conquest. Being forced to leave their homeplanet by another species, one that was more ferocious than the weak water-bound Nakai, they turned into a warfaring species themselves. Weak like a child, they are by no means skilled in hand-to-hand combat, but what they lack in physical power they make up with their high intelligence, their weapons and most notably their incredible number. Wherever one Nakai spaceship appears it is more than likely that more will follow soon, often hundrets of them.

After thousands of years full of war and exploration, the Nakai others meet today are completely lacking any positive emotions like kindness and compassion, and most species would rather die than being captured by them. One day the whole galaxy will be theirs and with it their much longed for revenge...

*Story, Profile, Overlay and Screencap by me

Piece of a Confused Sky