Wilf has a minion!

It wasn't that the other penguins didn't like Wilf; he was well known in the community for being warm, friendly, and generous with his fish. He loved giving the baby penguins rides on his little sled, which always made him a hit among the mother penguins. Wilf would often be found in the Penguin Cafe, chatting and laughing. What the other penguins found hard to digest were Wilf's tall tales. Like the time he claimed to have guided Amunsden to reach the North Pole. Or the time he took on Fred, the fearsome walrus, and scared him away from hunting the young penguins. Then there was the time he met The Snowman and danced around the Christmas tree...the list was long, and each story was more and more amazing. Sadly, Wilf's stories were usually met with groans, mutters and plenty of tutting.

One particularly cold winter evening, Wilf left the Penguin Cafe and decided to take a different route home. He waddled along, talking to himself, when suddenly he fell through a hole in the snow. It took him completely by surprise, and after falling a short distance, he landed with a thud. Wilf got up quickly and looked around. He had no idea where he was, but he knew he had never been here before. There were toys on benches, all around him. Great big piles of toys. And elves. Lots of elves. They looked at him and said 'Are you the replacement?'. Wilf wasn't sure what they meant, but replied anyway. 'Um, yes, well maybe. I'm not really sure. Replacement for what exactly?!'

The elves smiled and proceeded to explain. One of Father Christmas' reindeer is sick. So sick, that he can't help pull the sleigh and deliver the toys to all the boys and girls. A replacement was ordered several days ago, and now it would seem they all thought Wilf was taking the place of the sick reindeer!

Just as he was debating whether to own up to things, he heard a cough behind him. He swung round only to find himself face to face with Father Christmas! 'Hello young penguin, I am not entirely sure you are the replacement I asked for, but never mind, you will do. Let me show you the ropes, we don't have much time. It's Christmas Eve, you know!'

Now Wilf was beginning to panic a little. He knew for sure he wasn't as big as a reindeer. He also knew he wasn't strong enough to pull a giant sleigh packed full of toys. Surely this must be some kind of mistake?! Not wanting to disappoint, he shuffled his feet a little. Not sure what to say either, he looked around the room, avoiding eye contact. As he was about to speak, Father Christmas started walking towards a door. 'Come on, come on, time is short!'.

Wilf was very concerned now. He waddled quickly to catch up to Father Christmas, saying 'There's been a mistake, I'm sure there has. You see, I'm a penguin. Wilf is my name. But I am most definitely not a reindeer! So I am sorry, but I really can't help you.' Father Christmas stopped, turned to face Wilf and said 'Wilf, is it? Well, you are most welcome. I admit, you are not the replacement I had been expecting, but really, we have no choice. I cannot disappoint the children, I simply cannot!'

'But, but...I can't....fly!!' Wilf protested. 'I am absolutely positive I can't fly. I mean, I've not really tried, but I am almost certain I can't. What am I to do?' Father Christmas beamed a big smile, and gave out a little chuckle. 'Oh Wilf, reindeers can't fly either! You have nothing to fear! They can only fly after they have eaten the magic food! So let's get to it, you need to eat, and lots of it!

It was then, looking around at the reindeer, that Wilf noticed they all had bowls of food in front of them, and it was sparkling and twinkling. He wasn't sure at all that it was safe for a penguin to eat, and it didn't even look very tasty. The reindeer all stared at him, almost willing him to tuck in, so they could get the most important job of the year done in time. Feeling very unsure, and a little overwhelmed, Wilf decided he had no choice. He had to eat. So, he tucked in..and felt very strange indeed. He began to shake all over, and his flippers felt extremely strange. He wasn't sure what it was, but it all felt very...strange.

Wilf was surprised that he managed to eat the whole bowl, as it actually tasted horrible. Like stale hay, or grass, or something that penguins would never eat. Still, he was pleased with himself. He felt that now wouldn't be a good time to burp, so he kept it in. 'Good, good' said Father Christmas, 'Excellent! Now we are ready. To the sleigh!'

The elves led the reindeer, and the rather terrified Wilf towards the enormous sleigh, and began to fit the harnesses. After making some adjustments, they also managed to fit one to Wilf. He was becoming more and more alarmed, and was quite sure he really didn't want to fly at all.

The other reindeer began to give Wilf some encouragement, telling him it was nothing to worry about and that it wasn't scary at all. In fact, it was the most amazing feeling in the world, to be able to fly and pull the sleigh for Father Christmas! So Wilf resigned himself to the inevitable. After all, he was harnessed in now, and there was no escaping. The reindeer began to move, and Wilf had to move along with them, or be pulled over and dragged along on his belly. They got faster, and faster still, along the ramp towards the open double doors...which led into the dark, cold sky! And before he had even had a chance to catch his breath, they were out! Flying into the night sky, pulling the sleigh behind them, listening to Father Christmas give them praise for pulling so well.

Wilf was flying. He really was flying! It was the most amazing thing to ever happen in his life. He was excited, terrified, thrilled, and feeling a little sick. But with the encouragement of the other reindeer and Father Christmas himself, Wilf was helping to pull the sleigh! It took a few times of landing on house roofs before Wilf got the hang of things, but he was a quick learner, and by the end of the night, he was positively enjoying himself. Before he knew it, Father Christmas was telling them all how proud he was of them, and how hard they had worked to bring joy to all the boys and girls. And how they deserved a nice long rest, now their work was done. A short flight back to base, and Wilf was being unharnessed, and congratulated by everyone.

He was giddy, jumping up and down with glee. He simply couldn't believe what had happened that night. After hugging several elves, and a few reindeer, Wilf turned to see Father Christmas in front of him, smiling a big smile. 'Well done, young Wilf! You were superb! We couldn't have done it without you! Well done indeed!' Wilf felt rather bashful all of a sudden, and not really sure what to say. So he just smiled a goofy smile back, and shuffled his feet. Father Christmas led Wilf to a door, and said 'This is the way back for you, a short distance and you will see the path that leads to your home. I cannot thank you enough Wilf, you did an outstanding job. Merry Christmas!'

Before he knew it, Wilf was outside. Looking back, he couldn't see at all where he had just been. It was as if it had never been there. He quickly waddled back to his home, put on the heating, sat in his comfy armchair and chuckled. He chuckled for quite some time, before saying to himself 'Holy carp, the boys are NEVER going to believe this one!' After a good sleep, Wilf woke up, excited for Christmas. He was going to meet the other penguins at the Penguin Cafe for a special Christmas fish meal. As he opened his front door, Wilf was surprised to see a present outside the door. It had a label on it, 'For Wilf, with thanks'. He took it inside, ripped off the paper, and to his delight he saw a porcelain miniature sleigh, with a miniature Father Christmas, and reindeer...and at the very front was a Christmas penguin, helping to pull the sleigh! He couldn't believe it, a special gift just for him, from Father Christmas! 'I wonder when he delivered that?!' thought Wilf, 'we certainly didn't come here last night.' He left the house with a big smile on his face, wondering what on earth the other penguins would think to his story.

Wilf was quite right. They didn't believe him. But they did all have a very Merry Christmas, and a delicious fish meal. And even though they had to listen to Wilf's story about the night he helped Father Christmas deliver the presents to all the boys and girls, for once, the penguins just couldn't help but smile! 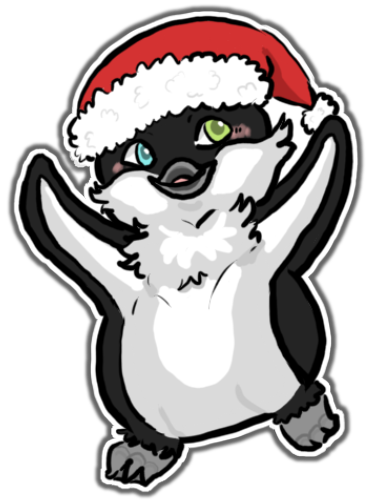 Carrots for the Reindeer