Sewell has a minion!

Evil Thoughts the Dark Thing in a Box 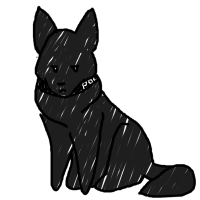 
Another day, another deal.

Sewell knows today will be a good day. He always hoped that he would one day be able to get rid of that dipshit Coleridge, but that it would be that easy, he would've never thought so.

Smiling he walks his patrol through prison, checking on the inmates and also annoying them, just for fun and because he can. He's the boss here and if anyone kicks out against him, he'll gladly show them why they should never even think about it. He loves hearing them talk about him, how they seem to even invent new names to call him just because he's the most badass corrections officer ever.

Yes, really badass - and not just a sissy like Coleridge and a few others. Sewell huffs scornful as he sits down in his small office where he will spend most of the time today while being on duty. Let the others do the hard work as long as he can bask in the light of fame afterwards. Today he just wants to sit here, listen to the radio and sleep, at least until evening when he will demand his part of the deal from his beloved cupcake Murphy who dared to agree to all this.

And if he should break the deal, he'll see what he gets...

Profile and story by me