Captain Isabela has a minion!

Fanpet for Isabela from Dragon Age 2.

The woman that walks into the Hanged Man is a sight, bedraggled and scruffy, like a rat that’s been soaking in the bilge for a week. Her ripped, weather-beaten smock is stained with soot from Lowtown’s chimneys and her boots, while of fine leather, are well-worn and crudely patched in a number of places. Her bearing, however, is proud, even arrogant, and she strides into the tavern like she owns the place.

“They told me I could get a drink here,” she says, coming toward the bar with a singular purpose. She slaps a half-dozen silver coins onto my counter. “What’ll this get me?”

“Then keep the liquor coming till the coin runs out. And make it strong.”

I wipe a chipped clay tumbler with my apron and fill it with the tavern’s most potent brew. She snatches it from my hand before I’m done pouring, and downs the drink in one gulp.

“You really needed that, didn’t you?” I pour her another drink.

“You have no idea.” She sighs and rubs her temples. “They call me Isabela, by the way. You might as well learn the name. I think I’m going to be here a while.”

It doesn’t take long for a foul-smelling longshoreman to show up. Isabela stiffens as she feels a hand, low on her back. The longshoreman opens his mouth to say something, but never gets the chance. Isabela grabs the man by the wrist, twisting his arm behind him. His cry is one of shock rather than pain, but that quickly changes as Isabela rams her elbow into the back of the neck, slamming his face into the wooden bar-top.

“Touch me again, and I’ll break more than just these,” she hisses in his ear. And then she snaps the fingers of the offending hand. I hear a crunch, several sickening pops, and a howl of pain. The longshoreman slinks away, cradling his hand and spitting curses.

“What?” she says, holding the empty tumbler out for a refill and daring me to make a comment, any comment. I gesture towards her striking outfit—nothing but a chemise worn without the benefit of a jacket or cloak, covering only the barest minimum required for decency. Put on something like that, and you’re going to get attention whether you want it or not.

“What? This?” She picks at the laces on her bodice, then lets out a short, bitter laugh. “Would’ve dressed up for you, but I left all my polite clothes at the bottom of the ocean.”

As I ponder the meaning of that statement, one of a group of Lowtown ruffians sidles up to the bar. He smirks, greasy lips sliding over yellow teeth in an expression that’s more grimace than smile. “I’m Lucky,” he says.

“Is that a name, or a description?” she asks, not even looking at him.

“It’s both. And If you’re new in Kirkwall, you’ll want to talk to me. My boys and I know everything going on in this town.”

“You know,” says Isabela, coldly. “I once knew a dog named Lucky. Obnoxious little thing, and too stupid to know when he was two yaps away from a kick in the side.”

Lucky turns beet red, and glances at his mates for moral support. Lucky’s boys jeer and laugh, offering no support whatsoever, and Lucky beats a hasty retreat. Isabela plays with the clay tumbler, turning it around this way and that, examining its numerous imperfections. Her eyes narrow.

“Wait,” she says suddenly. “If you know everything going on in Kirkwall, maybe we should talk.”

Lucky nods and grins. Isabela turns to him and I catch a mischievous glint in her eye.

“You see,” she says, smiling for the first time. “I lost something in a shipwreck, and I’d like for it to be found.” 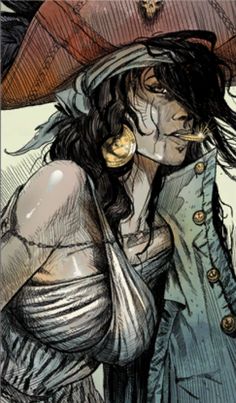 "Sailing is like sex. Do it wrong, and it'll make you sick. But do it right, and there's no feeling in the world like it."

"You see, sweetheart, men are only good for one thing. Women are good for six."

"Don't bet anything you're not prepared to lose."

"The Past's past. I learned that young. If it can't bring you gold or giggles, what's the point in dwelling on it?"

"Our mistakes make us who we are."

"Pirates only care about a small number of very specific things: the sea, strong drink, and booty. Both kinds."

Map to a Hidden Cove