Tormentor has a minion!

You don't know what I've seen.
It's none of your business. 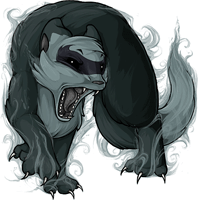 At first sight Eric is just an ordinary 30 years old man working in a music shop, but in fact his life is more interesting than anyone would ever think of. Even though he's by far not very imposing in figure, people claim that the look on his face gives them the chills, the way he moves, talks and his overall behavior are often enough to even turn some huger and stronger men than himself into whimpering puppies.

Sly and calculating as he is, he knows that his boss will never find out about his past and the reasons that led him from the canadian North Bay to Modesto in California. The only one knowing about this secret is a small locked box hidden under his bed, containing his mostly prized treasures: 16 locks of hair.

James, Susie, Charlene, Donnie, Steven, Angela, Jennifer, Marc, Gabrielle, Anthony, Stephanie, Oliver, Benny, Katie, Justin, Edith "Call me Edie". The reasons for their death were of different nature, but one thing they all had in common: Eric had to kill them. He needed them to die.

Ever since his birth he never felt loved, never had the chance to show that he's more than the low creature others see in him. His first foster parents changed him into the man he is now, slowly but very effectively they erased his soul and personality and forced him to view his life not as something to cherish and enjoy but as something that is cruel and full of hatred and violence.

He killed his first victim when he was 19 years. Only an accident. he thought. But the feelings remained for days. He felt excited. He felt happy. He could approach people, talk to them, meet others. He felt normal. He felt alive.

Slowly the feelings vanished, made space for his miserable life again. Months passed, and Eric turned into a recluse again, only leaving his small apartment for work. Then Susie came along, another "accident" happened, and again Eric began to cherish a social life. That's when he became addicted to violence. Over the years 14 other accidents happened, one more gruesome than the others. Eric can't stop himself. Life is built on violence, just like his parents taught him...

Mousy Curls Of The Undead