Charms has a minion! 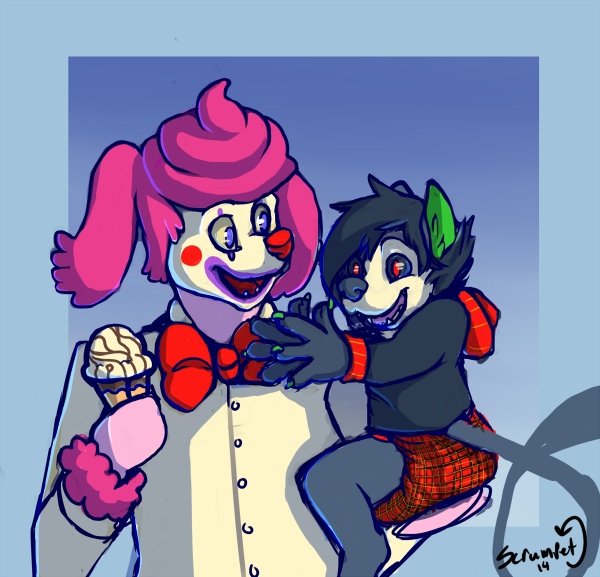 We All Scream for Icecream!
It was a busy day, but to Charms, every day was a vacation. There was absolutely nothing that made his life worth living more than the smiles of children.

"Have a wonderful day!" He would deliver to customer after customer. They would come and leave completely satisfied within a manner of minutes. No individual deserved less than the best, as he knew it was in him to make sure all were delighted. Profit was secondary, if not the furthest thing on his mind. Not even an eraser could hope to rub the smile from lips. Even though it was comical, especially due to the makeup he took the extra effort to apply and reapply throughout the day. However, Charms knew that it worked. His smile was contagious, as were the positive vibes he emanated while serving every last customer their treats.

Even as the rush slowed down, not a second was wasted, even on the most trivial tasks. Cleaning? Restocking? All were but a trifle, as the routine had become second nature to him after his many years of work. There was the occasional slip up hear and there, but one could hardly blame the clumsy poodle. Mistakes were just another excitement to keep the days from being stale. It was easy to say that this was his calling.

Charms knew he wanted to make those around him happy, but not through the grim reality of being a doctor, or the drama of being an aspiring star. The scope of his desires was simple, and he had everything at his disposal to make sure it was one he could make good on. The fleeting joy of comfort food was one thing, but Charms and his infectious optimism and good nature were quite another. Every one who would cross his counter would experience the kind of hospitality than one would think only existed in children's films. However, Charms was the real deal.

Every day was a gift, and Charms was the clean pink bow on top.