Beardie has a minion! 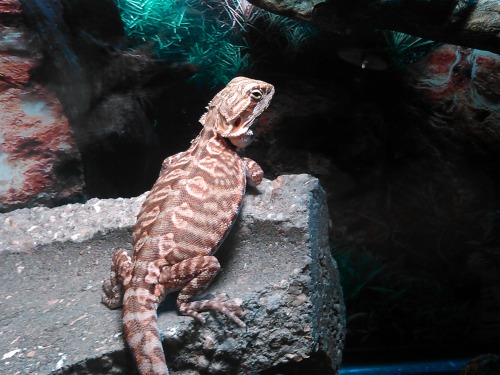 Charmaine was essentially my best friend. I had acquired her after getting medically discharged from the military. I was in a state of depression for almost a year until I got motivated enough to start working again. It wasn't until one day when I was browsing Tumblr that I saw a bearded dragon for the first time. I had a pretty sheltered life, and beforehand had only kept dogs as pets. But I always loved lizards and nature as a child. I used to go outside and catch them barehanded and would always attempt to keep them as pets before my mother or grandmother made me release them. I never thought that my love for reptiles would grow as much as it did until I got my very first one. From there, my obsession would grow into wonderful memories.

April 3rd, 2015, after working two months delivering phone books, I finally earned enough money to get my very first bearded dragon, Charmaine. I purchased her from Petsmart. She was very small, but bright, colorful, and alert. I had spent months prior doing all kinds of research and I was extremely excited to bring this cute little baby home, who was hardly any larger than my finger! Once she was home, she was immediately placed inside of a 20 gallon tank, where I allowed her to settle in for a week before attempting to handle her. She ate crickets out of my hand the very first time I tried to feed her! I was very surprised but also happy that she wasn't scared or wary of me! I knew from that point on, we would bond and become the best of friends!

June 5th, 2016, Unfortunately, just a year after getting her, Charmaine passed away. I experienced numerous health problems with her and eventually it got to the point where she would no longer eat. She didn't grow very large, had a picky appetite, started becoming more aggressive, and eventually her energy level began to plummet. I did everything in my power to make her feel better and more comfortable the day before she died. On the day of her death before her passing, I attempted to rush her to the emergency veterinarian office after she fell from atop her basking tree and began having seizures. However, she was announced dead on arrival when I brought her in. They supplied her oxygen but she would not respond. I cried at the vet's office and in my car before driving home with a now gone Charmaine in a box that was given to me. I was so depressed that I didn't bury her until two days later. It wasn't until afterwards, that the vet's office had called me to tell me her blood results. Charmaine suffered from calcium issues due to being unable to properly absorb vitamin D and UVB in her body. This is apparently a common result of inbreeding. There was nothing that could be done to stop it or make it better. She was a one year old leather back bearded dragon. Rest in peace my sweet pancake. 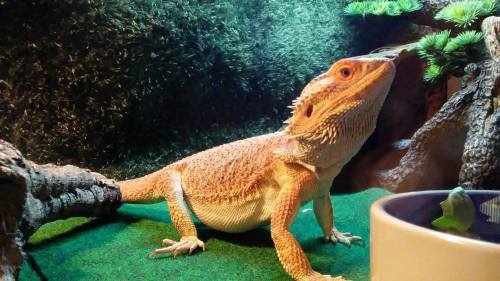 August 04, 2016, I adopted a second bearded dragon who I named Jupiter from a local, small business pet store in town. Initially I wasn't looking to rescue or adopt a bearded dragon; I was saving money to purchase a healthy one from a breeder. However, I walked into the pet store just to have a look around at some tank supplies. And thats when I saw a beautiful, brightly colored and extremely malnourished bearded dragon for sale. Although he was underfed, he was alert and energetic, chasing around crickets and eating lettuce in the less than ten gallon enclosure he was pitifully shoved in. I stood there looking at him for a good minute, debating on whether or not I wanted to hold him. I asked the store owner about him, and was told that he was a neglect case. Jupiter stayed in an apartment with a couple who weren't taking care of him or handling him. And they only fed him a baby mouse once a month for food. They then surrendered him to the store where he was being taken care of even more poorly for the past two months. After learning all of this information, I couldn't just leave him there. Two days later, I picked him up from the store and brought him home with me!

Jupiter and I got off to a very rocky start. He wasn't used to being handled, he came from an abusive environment, and he wasn't being fed properly. All of this meant that I had to take my time to bond with him. After letting him settle in for a couple of weeks, I finally started the process. Jupiter would NOT let me hold him for very long; he would hiss, his beard turned black, and he would wiggle and squirm to get away from me. But never once did he attempt to bite. I would take him out and let him get used to me everyday for about five to ten minutes before putting him back in his tank. There were times where I couldn't even stand next to his tank because he would get stressed out and he would turn from a vibrant orange and tan color to pitch black. After a few weeks, a vet appointment revealed that Jupiter was riddled with parasites, and was also on the verge of suffering from metabolic bone disease due to his sub-par care. I was able to get him treated and cleared right up in a few weeks. He slowly began to show signs of more trust during this process. One day I decided to take him with me to the park. He didn't fidget or make a fuss, and stayed on my shoulder the whole time we were there. He even let children touch and pet him. I could tell that his behavior was starting to improve and I would reward him with bananas.

Fast forward to current time, and Jupiter is still with me today! And he is absolutely spoiled rotten! He loves all the attention, loves to eat, loves to wander around and explore. But he doesn't like going outside too much. Jupiter is my cuddlebug; he enjoys resting on my lap or curling up in my bed. When he wants to spend time, he will pace back and forth in his tank until I let him out. Its honestly still surprising to me to this day that he started off so hostile towards people and now he loves everyone. Jupiter has rightfully established himself as the family pet among all my other pets! 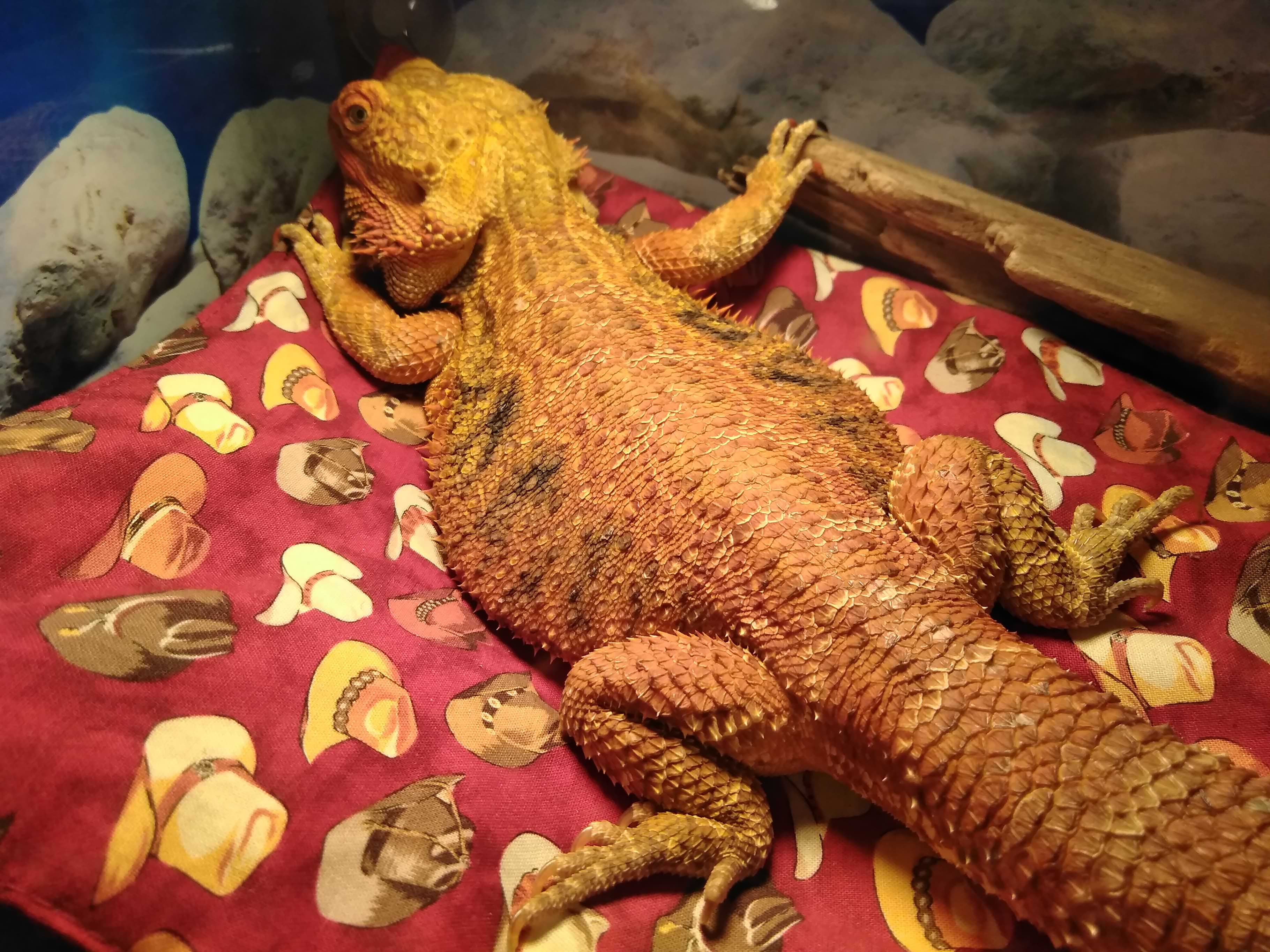 February 26th, 2018, I brought home Venus! After having Jupiter for a while, I began thinking about getting a female bearded dragon. Initially I started looking around for any adult or juvenile female bearded dragons in my area for sale or adoption. However, I had also acquired other reptiles during the last couple years and really had no place to put another bearded dragon at the moment. I eventually decided to just wait until I was better prepared and equipped, as getting another large tank and accessories would be costly and I didn't have too much money at the time. Well, while I was checking out at Petco, a good store employee that I knew just so happened to be talking about a friend of hers needing to rehome a four year old bearded dragon. Obviously curious, I chimed in to ask if it was male or female. I was told female. So of course, I (very impulsively) agreed to adopt her. I kicked myself in the foot for doing that. I knew I didn't have the money to buy a tank and everything else, and I knew I had made a rash decision. Nonetheless, I still agreed to adopt this dragon.

When I continued to message the owner throughout the day, she told me that the place she was moving into would not allow reptiles and that she would give me all of Venus' tank accessories and stuff that I needed. A sigh of relief left my mouth. I didn't think the owner would be generous enough to just hand me a bearded dragon and a complete setup for free! After chatting for a while, we agreed to meet up. We met each other outside of a bar, got to know one another, and then the owner showed me the bearded dragon. Venus was absolutely gorgeous! She was a brilliant array of orange, gold, and yellow with stunning silver silver eyes. She was also... a he! Thats right. The owner had no clue about the gender until I checked to confirm that Venus was actually a male. I felt a little bad that I didn't get the girl that I wanted, but at the same time, I was helping both a lizard and a person in need. I agreed to take him in and from that moment on, Venus and I became friends. Sort of...

As it turns out, Venus was not four years old like I was previously told, but much older at at least six years. Venus also wasn't handled very much, and has very poor eyesight, which means that he must be hand fed as he cannot see his food very well unless it is moving directly in front of his face. Since his sight is poor, he is naturally defensive and slightly aggressive. He doesn't like his legs or back being touched. He'll tolerate a few head scritches. His movement is very poor, and he is LAZY. Which resulted in me having to downsize his tank to make it more comfortable for him to move around. Since taking him home, I have only been able to bond with him a little bit. As said before, he tolerates my existence. As such, I call him my grumpy old man, because thats exactly how he acts. But I still wouldn't trade him for the world! <3 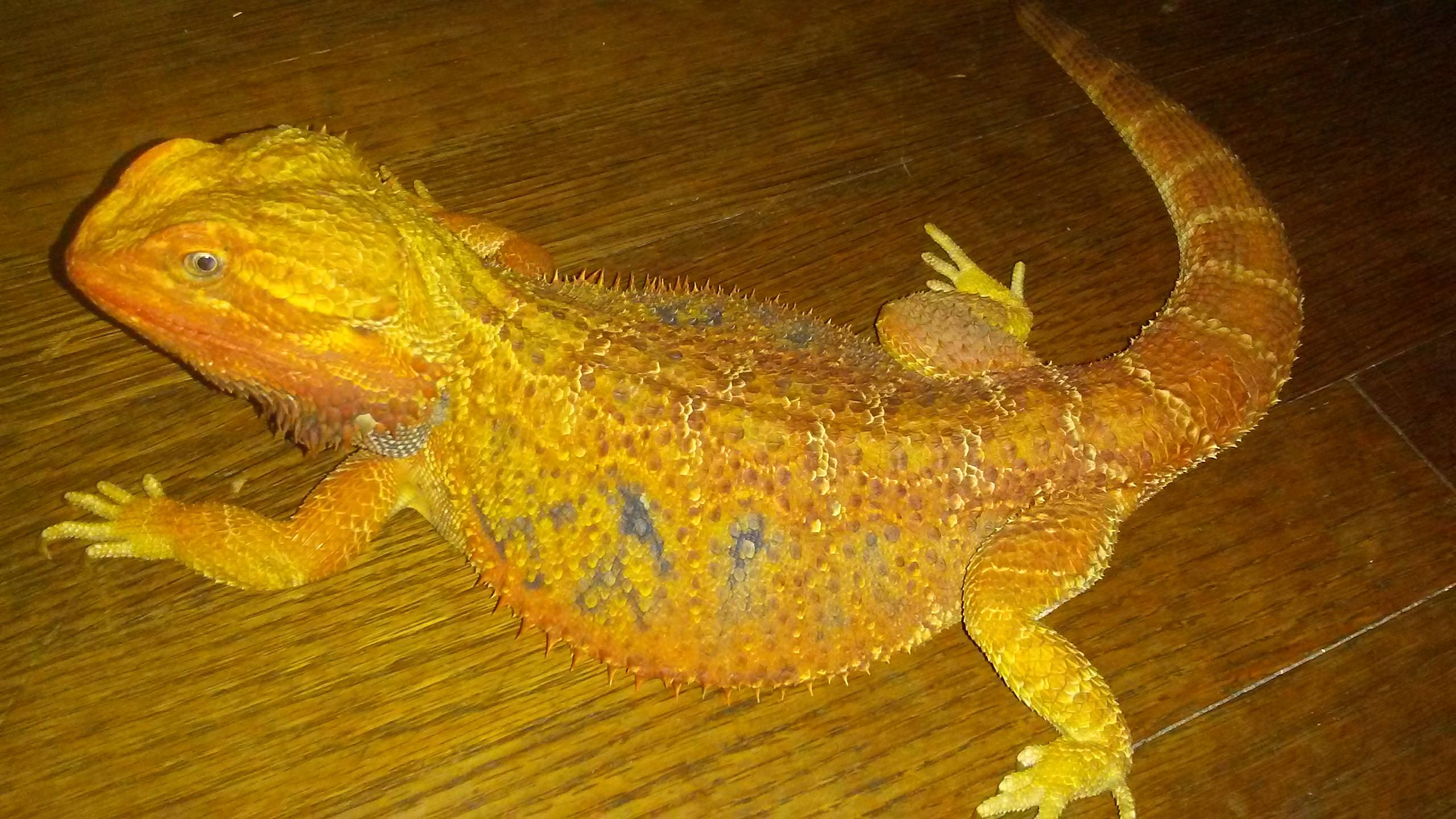 Charmaine sitting in her bowl 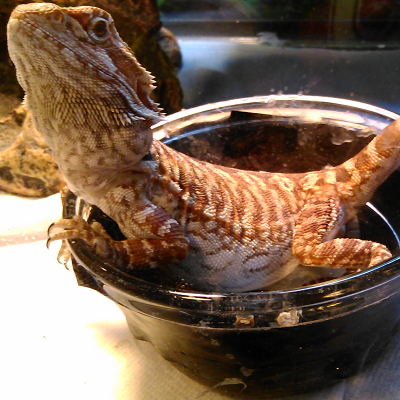 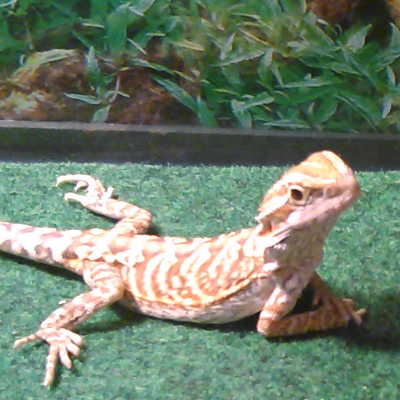 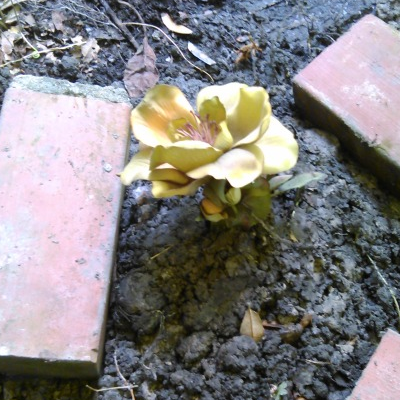 Jupiter before I took him home from the petstore 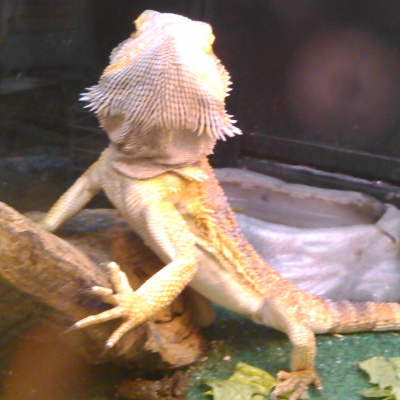 Jupiter before he began trusting me. Note the black beard. Human no touchy! 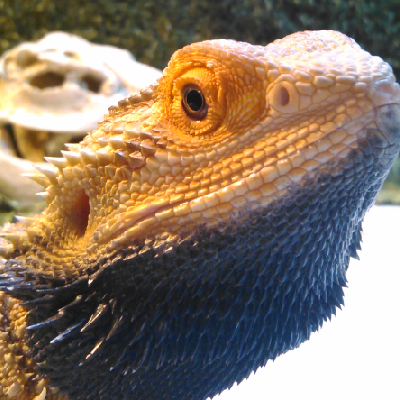 Jupiter sleeping in my bed :) 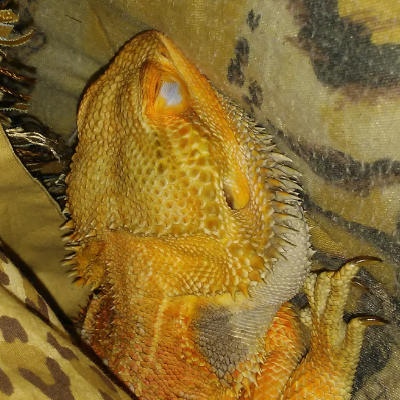 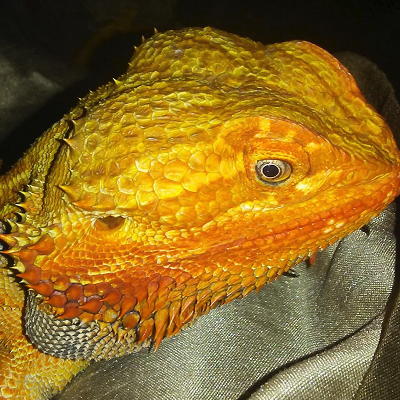 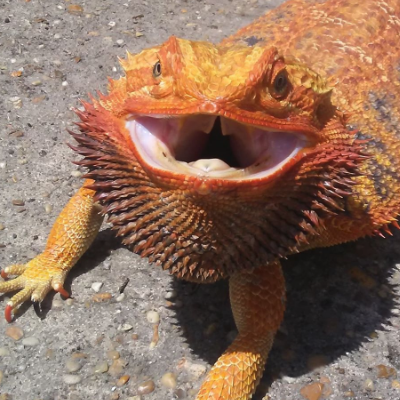 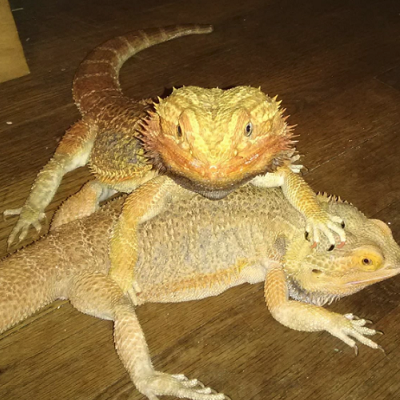 Layout by User not found: jmarie453

All bearded dragon pictures used were taken by me, including the background which is a picture of Jupiter. :)

The Big Book of Lizards