Joseph Oda has a minion!


Warning: even though this story is only my own interpretation of what could happen after the events of "The Evil Within", it still contains Spoilers for the game; if you do not wish to read this, move along please.

You want to read anyways? Scroll.

Joseph Oda was the one his colleagues asked for advice. Whatever they wanted, he knew the answers. He was the one who thought before he acted, put brains over brawn, and for years this mindset paid out well for him. Always considerate to others, he was a steadfast man who never gave up on something he had committed to. His almost unnatural persistence often got him into trouble, but he never left his chosen path.

All this changed in October 2014 when he and his colleague Sebastian Castellanos were facing true nightmares, a gruesome world they couldn't escape. So they thought. Slowly darkness overshadowed Joseph's mind, made space for black thoughts, things he hoped to have buried deep in his brain.

Ruvik's hatred infested Joseph's mind and he became more and more violent. The monster had planted its seed, knowing that Joseph would be unable to fight back for long. Not being able to stop his mutation into a cruel and mindless creature, Joseph saw no other choice than ending his miserable existence. He didn't, for Sebastian.

They escaped. Ruvik's world vanished, and for weeks Joseph tried to forget what has happened. He couldn't. Every time he thought his life turned normal again, something deep in his mind seemed to struggle free again, crushing every tiny gleam of hope and positivity. 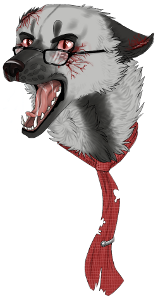 Today not much is left from his old self. He survived the nightmare, but the wounds on his soul will remain; he knows they will never heal. Kindness made way for cruelty, and even though he smiles at others, in his damaged mind he sees them dying by his own hands. Choking, drowning, shooting, beating, burning, chopping, or any other way that he considers gruesome enough. Everyone must die.

The remaining bits of sanity fight against the thoughts infested by Ruvik. He still hears his voice in his head when everything around him is silent, sees his face and sinister smile when the dark of the night surrounds him.

But a last part deep down in Joseph's once kind heart knows that he has to turn around before it's too late. Slowly it will grow stronger again and fight back the darkness.

It worked once, and it will work a second time, even if it takes years. One day the old Joseph will return...
~*~

Clockwork
Waist up by

*Based on Joseph Oda from
Bethesda's "The Evil Within"

*Quotes & Image (c) The Evil Within

Preserved Eyeball in a Jar