Maverick has a minion!

Peace of the Haru

Maverick was a mine dog, working in Afghanistan alongside his trainer, Sgt. Lewis 'Bear' Williams. They had been partners for almost four years. Mine dogs are trained to find trip wires, booby traps, and mines and alert their trainer so the devices could be detonated safely.

Maverick was leading a patrol. About four hours into the patrol, Maverick located an IED (improvised explosive device). While he was searching for the secondary device, it detonated. It was all over in seconds.

Bear carried Maverick back to the base in his arms; soldiers don't leave other soldiers behind. He then buried him with honors. He would never forget the greatest dog a man could ever have; Maverick the war dog. He had given up his life, to save others - Maverick had done his duty. 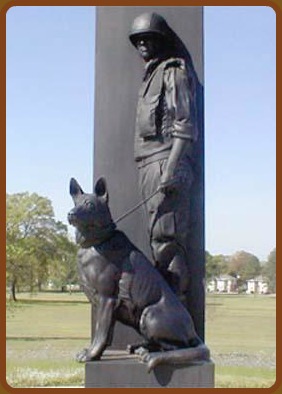 I was trained to use my eyes to watch and protect you from harm
My ears to alert you of impending danger like an alarm
My keen sense of smell to detect an enemy close at bay
Yes I was a soldier who gave my life so you could fight another day
So remember me as time goes by, this soldier dog so true
For I had only one life to give and I gave that life to you.
{by Joe Ferrar}

Coin of the Dog