You are the Sweetie Star 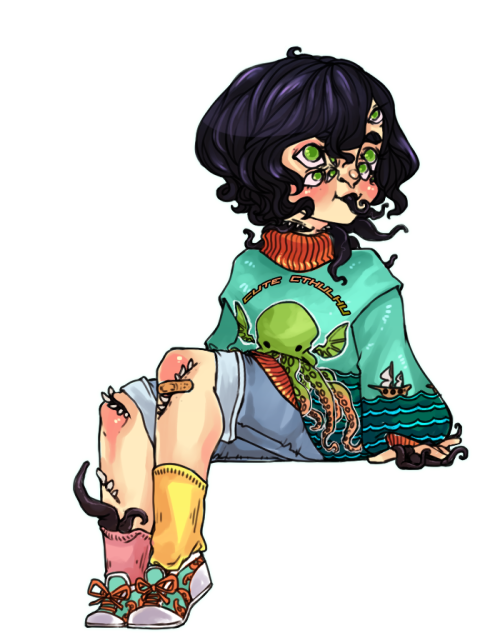 Born in a bucket, this little leech baby is the child of two unlikely fathers who never expected that they would have next to their regular daughter a supernatural child. Tais tries to understand the world by mirroring behavior he sees on his sister, though he can't and should not do all the things she can -like eating or drinking. He'll merely teleport food at another place so a traveler might be slapped in the face with a slice of ham. He also should not bath in hot water as his body is not fond of high temperatures and will turn into a liquid.

Due to his leech nature he can feed off of other people's negative feelings and is quite content just being held by them while 'eating'. Besides that he also often grows tiny black tendrils to grip things, extra small mouths and extra eyes that are strangely iridescent. Tais is curious, loves to explore and meet new people and creatures. He's open to anybody be they human or Eldritch horror.

Rift-Touched Eggs Sunny Side Up

Imp Doll in a Witchy Sweater

Save the Bumbii Slogan Tee

Cutethulhu I Loaf You Sweater

Too Pretty To Eat Cake Plushie

Too Cute To Eat Cake Plushie

Tea of the Old Ones