Carmina has a minion!

It's been three years. Three long and painful years since Carmina last saw Carl. They had been totally inseperable, best of friends and soul mates. She felt totally bereft, lost and full of despair. Now the days just merged into each other, but when Carl had been there, the days were filled with joy and contentment. This was a bond that nothing could sever...or so Carmina had thought.

That day started innocently enough. When the sun was high in the sky, Carmina and Carl made their way to Riverside Valley, one of their favourite places to visit. They lounged by the lake, talking about anything and everything. When the time came to move on, Carl suggested they head towards the mountains, in the hopes of getting there before the sun went low..and then being able to watch the beauty of the sunset.

Carmina was not sure why, but she felt uneasy for the first time in her life. Something about being in the mountains when it was almost dark filled her with a sense of dread. But being an Archan, who are renowned for their courage, and of course being with Carl, it seemed to allay her fears. So they set off. The air was sweet with the scent of the flowers dotted along the path, and despite her earlier misgivings, Carmina felt relaxed and safe.

The flowers beside the path made her think of the first gift that Carl had ever given to her - an orange Calla Lily. They would forever be her favourite, and it made her smile to be reminded of them. Carl had told her when he gave her the orange lily that he had chosen it for her because it was as beautiful as she was, and the colours as vibrant and strong. From that day on, he had given her a lily every week, and Carl told Carmina he had always loved to see the smile light up her face when she saw the flower.

She glanced over at Carl, such a proud and handsome Archan. Her heart swelled with love and adoration. The path was getting steeper and narrower as they began their ascent at Mount Teba, and some concentration was needed to push through the overgrown grasses and not lose sight of the path. Suddenly, Carmina felt that total sense of dread that she had suffered earlier. She turned to look for Carl, and he was gone. Nowhere to be seen. Not a trace of where he had just been standing.

Then, Carmina heard a piercing, shrill sound in the sky. She looked up in terror and saw....something. She wasn't sure exactly what it was. Could it be...no, surely not? There was tale of a large, mysterious bird/beast creature that lived high in the mountains, but no-one had ever convinced Carmina of its existence. Until now. In a few moments the creature was gone, flown out of sight. Carmina was stunned. Could it really have been the creature that legend called Fortuna? And where had Carl gone?

In a blind panic, Carmina began to search frantically, calling Carl's name, while knowing deep in her heart that he was gone. The tears stung her eyes, making it hard to see. She brushed them from her face, angry at herself for crying. After several hours, she grew tired and knew she had to rest. But she couldn't face the journey home without Carl, so she decided to sleep in some dense bushes at the bottom of Mount Teba. She slept, but her sleep was broken and restless. When the sun started to rise, Carmina awoke abruptly. And then she remembered.

She made her way sadly back to her home - to their home. The place that had been previously filled with happiness. Now just a silent and painful reminder. Carmina told some of the villagers later that day about her sighting of the Fortuna, but most just laughed at her. As the days passed though, and the villagers realised Carl was really gone, some of them began to believe she had really seen it. And that it seemed quite possible that Carl had been taken away by the bird-like creature. They were respectful whenever they saw Carmina, and although most did not speak to her, she knew they understood what she had lost.

Carmina now spends her days searching, high and low, for her lost love. Searching for her soul mate, the one she felt completely at peace with. Her life held no meaning anymore, all she can do is search...and wonder...if one day, she would see the mysterious Fortuna in the skies, and if her beloved Carl would be returned to her. 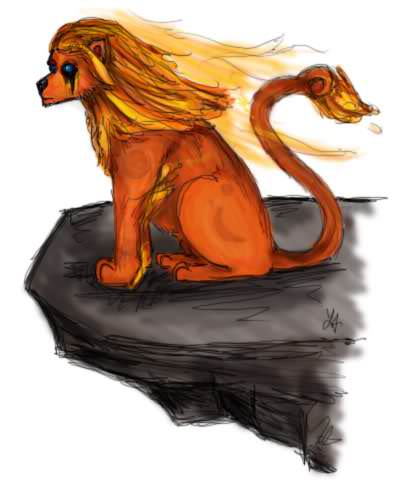