Ivor has a minion!

Do not look to the Pile of Dead Eyeballs

"Darkness fills the life, covers the tired mind
Like the darkest damnation, anxiety, oppression;
A wounded soul manages to escape
From exhausted body,
From the bleeding prison..." 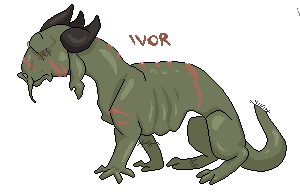 As he dragged himself through the floor he couldn't help but think of her. As his paws grasped to every tile hoping they weren't loose, the flinging pain burned his skin whole. The muscles were sore, his bones were aching but he had to keep going. It was hell to get back to the laboratory, and even though he couldn't see its walls and cages and the hundreds of test tubes and chemical mixtures, he remembered exactly the location of this and there, he needed no eyes to guide himself there. After all, he had spent most of his life locked in there — actually one could say, Ivor did spend his whole life inside it.
Ouch! He didn't really come to his senses about all that had happened until a shard of cracked glass screamed its presence digging inside his palm. But at least he was close enough, the door to his office was left open. And with a gentle push, he was once again inside his personal cage. 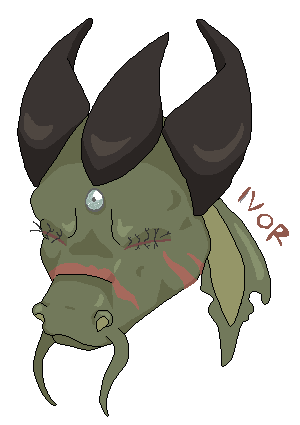 His lungs begged for a glimpse of air, and he laid his back against the wall. His office, his place, it would be a relief to come back if it wasn't so awful to breathe that smell again. He knew his medical coat was collecting dust on the floor a few steps away. He knew his desk and all his research papers were either burned, torn to pieces or taken into the unknown. He knew his laptop, his diary and all of his belongins must've been destroyed by now. But that wasn't the point, none of those were the reason he returned there. It was her that he was seeking.
He had to see it coming. When he first started working at that laboratory, when he was given the task to develop that virus, that one virus, he had to see the pandemic coming. He had to know it would be used for absolute no good, why didn't his scientist's intuition warned him, wasn't he a renowned researcher back then? What was he thinking when he accepted that job? He should have known it would cause a fatal pandemic, a zombie apocalypse, and he would be known to be responsible for all of that chaos. Doctor Ivor, what a joke! Years of studying couldn't make him see what was right in front of him. He should've known he'd be taken away — and take her away from him, too.
With a lazy arm, he reached for the one thing he expected to find at the shelf beside his resting place. He was praying to the lord it would still be there... When the inquisitors slammed down his door, he didn't mind the punishment and the torture, the endless agony and pain they caused to him, the poison he had to take (his own created poison) who made him die slowly from inside out. His face was scarred, his eyes and eyelids sewn together, his scaled ripped away, the price to pay for the hell he raised seemed only fair considering all the lives his creation ended. But that portrait...
Its glass was broken but Ivor did smile. He couldn't see any of it, but he could feel the photo still there, dusty and old, left to rot in a portrait by the shelf. He felt his heart at ease, knowing his beloved was there, looking back at him, in a photograph they took on their wedding. He remembered her, benevolent and sweet, and at the same time he hoped to find her and explain everything to her, and apologize for his crimes and his disappearance, he didn't want her to see his scarred face, his rotting body left to roam the underworld. But his love for her, it still remained as beautiful as his beloved's eyes. And he just sat there, for days, with a smile on his face and a tear escaping the stitches on his face.

"Feeling of loss, nocturnal suffocation
tears like blood, stench of decayed;
Alone, without a body,
Life is turned to hell;
Living in emptiness,
Torture of the timeless."

;
Story and art by Yorshka
My love, I miss you so much, so much. Rancora
I'm sorry. We're both stuck in this. Ick
Please, we must stop the contagion.