Baited has a minion!

Becoming a part of the vampire coven had given promise to Val that she would be a part of a family, never again to be alone in the darkness. Joining the coven had been her salvation from an eternity of unsated hunger with nobody around to understand. And when Cryus had welcomed her with open arms, she thought she had finally found what she had been searching for. How wrong she had been.

The first few months were just as she had dreamed; she was a part of a family that could empathize with the insatiable hunger always gnawing at the back of her mind, clawing at her insides and begging for a meal of someone's soul. They could understand what she was experiencing and since her birth, she'd had nobody that could fathom her inner drive. While she was a succubus, a demon born to suck the souls from unsuspecting victims, she still felt at home among the vampires. They had chosen their lives, to become a blood-thirsty creature of the night; or at least most of them had.

One in particular stood out from the rest; Jade. She, like Val, had no choice in becoming a such a creature and in the beginning, the two had bonded. Their common roots of creation and abhorrence for feeding on innocent people caused a bond between them that brought the two closer. They were like sisters, going on hunts together and making the best of their unconventional feedings, but as fate would have it, it would not last forever.

During one of the hunts, Cyrus witnessed first-hand the terrible and awesome power Val had as she ripped the soul from one of their victims, the man screaming in pain and terror before suddenly falling silent as his body crumpled lifelessly to the ground. All the vampires cowered around their leader, staring wide-eyed at the seemingly innocent, curvy woman standing only feet from them. It was then Cyrus started to formulate an idea, one that would heighten his power over his coven and secure his rank as leader.

When the group returned from the hunt, Cyrus invited them all for a 'feast' to celebrate their victory. While Val didn’t enjoy the feeding process or celebrating the deaths of others, the feeding was necessary to quell the madness from refusing to feed at all and taking part in the celebration was to keep herself a part of her new family. As they all entered the enormous dining hall, they were seated around the table while they waited for Cyrus to join them in their feast. What they didn’t know was that their leader had a very different idea for this particular celebration.

Upon entering the great dining hall, the doors were closed and barred behind them. While some thought it a bit odd, they mused perhaps it was to keep their ‘feast’ from escaping and they all took their seats, including Val, as they waited for the festivities to begin. ”Greetings, loyal followers,” a sudden, deep voice boomed into the hall, recognizable as Cyrus’ voice though he was nowhere to be seen. Glancing around the room, the vampires seemed just as perplexed as Val. “Tonight… we celebrate one among us who will solely assist in my rise of power, one who will secure my place as leader to all vampires.”

As he spoke, two of the oldest vampires in the coven came to stand on either side of Val, taking her up from her seat and holding her between them. Something wasn’t right and Val could feel it, but the rest of the group held onto every word Cyrus spoke. “Val came to us a few short months ago, and only tonight did we witness the powers coursing through her veins. With her power to devour the souls of the disloyal, I shall reign supreme above all else!” The vampires cheered and clapped in Cyrus’ name, praising all that Cyrus had done for them. “Sadly… those that have witnessed Val’s power must be removed.” With those words, several shadowy figures lurked forward from the edges of the room, revealing the oldest and most loyal in the coven. The swiftness of the elders was difficult to follow but Val watched as they cut down their younger brethren, spilling the fresh blood of the hunt from their bodies. Screams erupted from her throat as she watched on, witness to the terrible and wicked ways of their ‘beloved’ leader. She pleaded for the elders to cease, but her screams were drown out by the sounds of their brethren fighting and screaming in pain as they were taken from this world.

When the last one had been slain, only then did Cyrus make an appearance, walking up to Val as the two oldest vampires secured her between them. “My pet… had I known of your powers before, those that have been slain this night might have been spared. But none can know of your power. I fear they would follow you to the ends of the Earth and leave me to wither and die alone. Fear not, for you will still feed. I have great plans for you.” The way his words rolled off his tongue offered a threat that Val didn’t understand, at least not in that moment.

With a quick gesture, the old vampires pulled Val from the dining hall in favor of a small cell that would become her new home. Barred within, she waited in silence and darkness for something, anything to happen. Outside her cell, Cyrus took care to dispose of all those that had witnessed Val’s powers, killing them off one by one. Only one managed to escape; Jade had heard of the slaughter the night of the hunt and had fled in order to save herself, dooming herself to a life without a coven.

Days and weeks passed without feeding and Val could feel her body wasting. It had been so long that she had felt such hunger that it was difficult for her to keep up her glamour image, one that hid the bestial form she had been born with. The glamour slipped away piece by piece, revealing the horrid form beneath. Boned wings sprouted from her shoulders, spade tail unfurled behind, claws jutted from her digits and her usual, voluptuous curves wasted away, showcasing the bone structure beneath the skin. Her bright green eyes slipped away into shadow and a set of horns uncurled from her skull. This was her true form, the form she had hidden for so many years in order to blend in.

She lost count of the days, her mind only focused on the hunger that pounded inside her mind, begging for some small morsel. Finally, that morsel came. The door to her cell opened and a vampire she recognized was pushed inside, the door locked and barred quickly so neither the vampire nor Val could escape. The vampire pounded on the door, begging to be released, apologies rolling off his tongue for his mistakes. As Val stood, she used what little energy she had left to pull her glamour back on, disguising her hideous form as she stepped from the complete darkness to greet the vampire.

The movement caught the vampire’s attention and he turned, eyes wide at first until he saw who it was approaching. “Val. What the hell happened? The whole coven has been wondering what happened to you! What’s going on?”

As she approached, she groaned a little at the effort it took to keep her glamour in place, feeling it slipping here and there. “I’m sorry…” she whispered as she let her glamour drop, her demonic form crashing over her body in one, sudden motion. The vampire stood with wide eyes, mouth agape in fear. “I must feed.”

pickle for letting me adopt her! 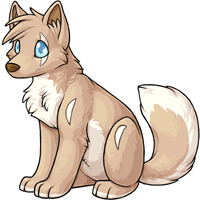