Cephalopods has a minion!

What are cephalopods, you ask? Well, they are a class of tentacled marine animals, including nautiluses, octopuses, squid, and cuttlefish. They belong to the phylum of mollusks, meaning they don't have any bones and are related to snails and clams.

The word cephalopod comes from the Greek kephalópodes, meaning "head-feet". Accordingly, a cephalopod's limbs are right next to its head! In fact, its head is directly between its tentacles and its mantle (which is where its internal organs are stored). 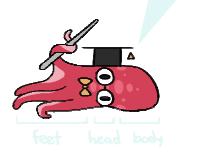 Cephalopods first evolved hundreds of millions of years ago, during the late Cambrian era. Early cephalopods had chambered shells, which they could fill with air to adjust their buoyancy. Some species grew to gigantic sizes, their fossils even longer than humans are tall!

As they evolved, cephalopods traded defense for speed, becoming smaller and more maneuverable. The nautilus is the only cephalopod that still has a shell today.

Coleoid cephalopods do not have external shells. They are divided into two categories, based on their number of limbs.

Decapods have ten tentacles in all: two long ones to catch prey, and eight shorter ones to keep hold of prey as it is consumed. Squid and cuttlefish fall into this category. Most decapods retain a small internal shell, called a gladius or cuttlebone, which is still used for support and buoyancy.

Octopods like your humble Professor only have eight tentacles, and no vestigial shell whatsoever. That means they can squeeze through any hole bigger than their beak! In addition to octopuses, vampire squid are also in this category.

All cephalopods are carnivores. They grab hold of prey with their tentacles and then use a beak in the center of the ring of tentacles to take bites from it. They are especially good at hunting clams: they can drill a hole in the shell with their beak and then inject venomous saliva that paralyzes it, forcing the clam to open. Most cephalopods have a radula, which is a structure like a spiky tongue that scrapes food into smaller pieces for digestion.

Fun fact: despite its fearsome name, the vampire squid is the only known cephalopod that doesn't actively hunt for prey! It feeds on marine snow, which consists of organic detritus that slowly falls toward the ocean floor.

Cephalopods are jet-powered! They can swim using their tentacles and fins, but when it's time to go fast, they can expel a jet of water from a siphon at the base of their mantle. They can also expel a cloud of ink as a decoy along with the water; many predators will attack the cloud while the real cephalopod escapes.

Cephalopod skin also contains bumpy structures called papillae, which can be deformed to change its texture. With the ability to match both the texture and colour of the terrain around them, cephalopods are masters of disguise who can fool predators with the best eyesight.

One curious thing about cephalopod mimicry is that... as far as scientists can tell, most cephalopods seem to be colourblind! So how do they figure out what colours to mimic at all? Research suggests they may be able to see polarized light or chromatic aberration, or that their skin itself contains colour receptors. Until we learn more, it's still a mystery.

Although their nervous systems are completely different from human ones, coleoid cephalopods are thought to be the most intelligent invertebrate animals. They have a large donut-shaped brain, as well as decentralized neurons spread throughout their tentacles. Individual cephalopod tentacles are capable of acting on their own to a small extent, and will continue trying to pass food up to the mouth even after being severed!

Cephalopods display clear play, cooperative hunting, tool use, and problem solving behaviour. In fact, octopuses are notoriously difficult to study because they are little escape artists with strong personalities! Bored aquarium octopuses are known to cause short circuits by shooting jets of water at electronics, break into other tanks to eat the occupants, and even throw rocks to smash glass.

Because cephalopods evolved intelligence in a completely different way from intelligent vertebrates like humans or corvids, the study of cephalopod intelligence has been crucial in gaining a broader understanding of animal cognition in general.

That's all for today! Cephalopods are a fascinating class of animals, and there are tons of topics we haven't even touched on in this brief overview. But I hope you were able to learn a little bit about these squishy aliens you share your planet with!

Squid on a Stick

The Monster in the Lake