Zalika has a minion!

"Thousands of stars surround this world and
I always wonder where the border
Gets to the end;
Thousands of questions in my head.
How many times you have been standing
In front of millions lights still flashing
Light years away?
Down to hole of time and space..." 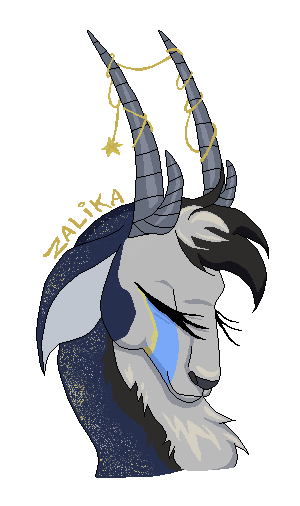 It's not as if she did not like her life, she always loved the Moon and she thought she was in the right place for her entire life. Or so she used to think.
Zalika was one of the priestesses devoted to the Great Goddess, the Moon. Her longline silhouette and extreme peace of mind made her worthy of a high position in her rank, for she was the one who performed most of the rituals at the center of the circle because of her brilliance , innate. Faith and devotion in the heart of Neela filled her in such a way that she had always felt complete, from a little girl. She heard stories of the divine work of the priestesses and always dreamed of getting her share with the fellowship, but she never considered chance in her plans. And chance, this time, was aimed at the young girl and about to turn her world upside down.
Blessed by the Moon itself, which gave the stellar glow to her body, she took her faith very seriously. With the arrival of the date of her ceremony, all the tribes of the Beyond-Earth Society gathered to honor the newcomers, as they did with all tribes as a way of future recognition - especially for the Tribe of the Sun, who detested intruders and so they needed to know exactly the faces of each member of the community. It was during this ceremony, the first that officialized her as a royal member, that Zalika made her first slip. Head bowed in a sign of obedience and respect for the Great Goddess, for some reason she decided she could peek, just a little, for who knows how to watch while the starlight covered her hair. And it was in that innocent peek that she crossed glances with who she should not.

And the strange figure stared at her in the same way, both anesthetized in the crowd. 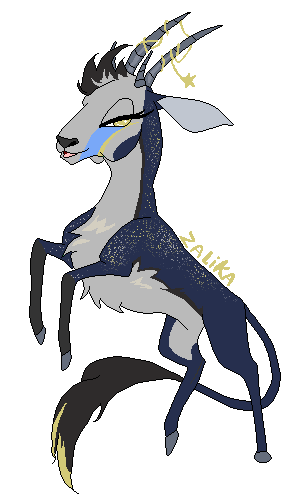 She felt as if that look had made her heart stop for a moment, for her breath was lost for an instant. That look was something she had never seen before, or felt. After the great ceremony, she crossed eyes with the same mysterious creature a couple of times, thence three, and then four. Until she realized, she was standing in front of the owner of that look. The glances became smilies. But chance, ah, chance loves to play pieces. And the owner of that look, she could never find again, for she belonged to the tribe opposed to hers, the furious Tribe of the Sun. Then in all the ceremonies and social events, the two met and exchanged silent smiles and smiles, in the greatest discretion could. But it was more and more difficult to live that way, for the ceremonies were rare and the desire to meet only increased.
Why, it is well known that the Sun and the Moon can never meet together in heaven except on rare occasions. And that was unbearable for both of them.
Until Zalika decided, again, to yield to chance and slip once again. Only, this time, Zalika made the most important decision of her entire life: She could stay and devote herself to her faith or go after that strange feeling by the fiery stalker.And so it was that Zalika fled from the temple to take refuge on firm ground on earth, hoping that her beloved admirer there would find her and they might finally be together.

Nobody has seen or heard from her ever since, despite the search groups that went down to find her. But it is known, her admirer from the Tribe of the Sun is missing too...

Adopted from User not found: kawaii;
Story and art by me (

Swiss on a Toothpick

Sigil of the Final Night

Lantern of the Final Night Aleida
Are you sure this is safe? Fidella
And what do you know? Kaeria
Thank you for your protection. Valma
So sweet, so thoughtful! Coira
Why did you stop howling? Ivor
Wait, you are familiar...