Factor V Leiden has a minion!

A Bloodred Blob rolled into a class of her fellow pets in the university she recently became a teacher of. She was there to educate them on the blood disorder, Factor V Leiden. A lot of these pets were going to have futures in the medical field, so it was up to her to raise awareness about the disorder.

"Hello, I am Factor V Leiden, the Bloodred Blob. I am here to talk to you and raise awareness about a blood disorder called Factor V Leiden. You might be asking yourself, what exactly is this blood disorder? Well, let me educate you on this disorder a little so you know." The blob looked at the eager class sitting in front of her. She was ready to take on the monumental task of teaching everyone about a very serious disorder.

"What is Factor V Leiden, Professor?"

A student raised their paw to ask her. She blinked a bit and then readied herself to answer the question. "Well I'm glad you asked, Factor V Leiden is a blood clotting disorder that is genetic. It's a gene mutation within a person's body that can cause the blood to clot abnormally and make the clots block blood vessels. People with this disorder have a higher risk of developing Deep Venous Thrombosis or DVT. Blood clots from this disorder often occur in the legs but they can occur in other parts of the body. (I.E. Eyes, Kidneys, brain, or liver.) Factor V Leiden increases the risk that these clots can break away and travel through the bloodstream." She sat down in a chair to look at the class. Paws shot up everywhere to ask her questions about the disorder and learn more.

A small ontra asked a question this time after being called. "Factor V Leiden Mutation is the most common inherited form of thrombophilia. Between three and eight percent of people who have European ancestry carry at least one copy of the factor in each cell. About one in five thousand people have two copies of the mutation. The mutation is less common in other populations, but that doesn't mean they can't have it." She looked around again and saw more paws and even fins this time! The students were eating up this information from her!

"Does it have anything to do involving pregnancy?"

A hippotu was the one to ask this time around. It was kind of obvious that she was pregnant and apparently concerned. "Factor V Leiden is often associated with a slightly increased risk in pregnancy loss. Women with this mutation are at an increased risk of recurring miscarriages or a pregnancy loss within the second to third trimester. Some research also suggests that the mutation may increase other complications during pregnancy including preeclampsia, slow fetal growth, and placental abruption." She stated matter of factly to the class. She stood back up and walked over to the white board. She started to write a lot of this information down so the class could copy it.

"How is it diagnosed and treated?" This time, it was the ontra again asking the question. "

The way to diagnose this mutation is through a simple blood test. Often treatment for this happens only when increased periods of prolonged immobilization happens. They treat through an injection called lovenox which is given in the stomach." She wrote a list of treatment as well as bullet points of very important information for the class to copy.

"How do you know so much about this disorder, Miss Professor?"

An archan piped up this time to ask her. "My mom was diagnosed with the disorder only because her mom had it. They tested her and found she has a copy of the factor." She turned and heard the bell ring for the class to end. Before the class left, she handed out printouts of different websites that the class could go to, to learn more information on the disorder.

Please feel free to look at the links below to educate yourself further on the disorder and to locate places raising awareness for this gene disorder. 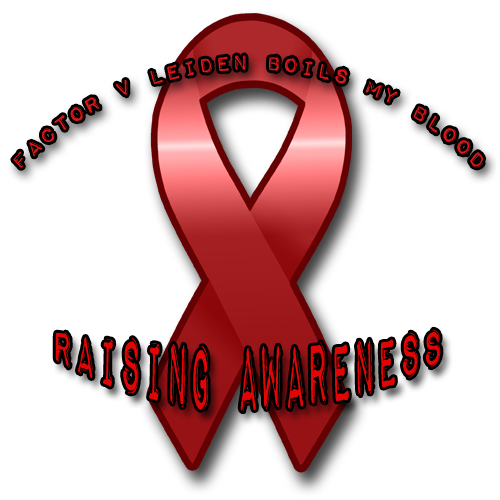 Information sourced by and rewritten in own words by Be Aware
My sister, bringing awareness for Multiple Sclerosis. Fighting Spirit
My brother in awareness, He's for Depression Awareness! Fibro my algia
My sister, bringing you Fibromyalgia awareness. Anxiety Post
My brother, raising awareness for Anxiety and PTSD.