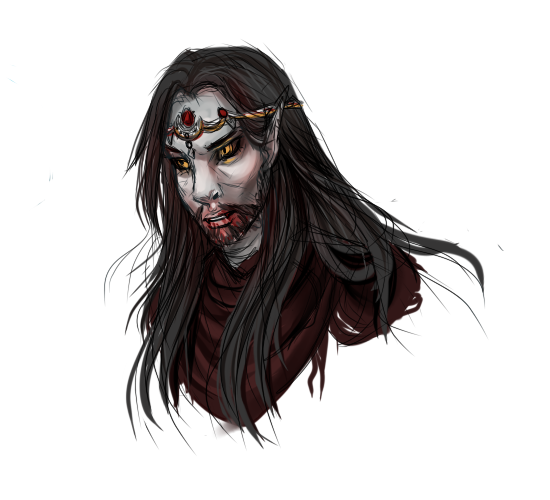 Thren had never imagined the day would come where he would put all his trust in one man. The concept of leaving his daughter in the hands of another-to have her safety possibly endangered- terrified him. Antonius had promised to protect her, that she would yet live but the mere idea of losing her brought forth an almost crippling fear. He had already lost Serana.

"Myrn has fallen, Thren." Antonius had said to him. "It is only a matter of time before Klaudius' forces invade Lyth and secure his throne. This is for the best. Trust me" That was another thing he had never expected to hear. Darrias was the emperor, not Klaudius. To hear of the younger brother in such a way almost confused him. Thren felt betrayed. The surfacers and their wars very rarely came down to Lyth since it was an underground civilization. It was different when the emperor lost his throne to a mad man. This was personal. Darrias had been his friend. "To run would make me a coward, Antonius." He had retorted as he and the Saoris king stood in his solar. "I cannot leave my people to die." Antonius had looked disappointed as he stared at the map on the table. He finally responded with, "You are Lyth's last hope. If he kills you then the vampire race will be lost to time. I offer you this only to preserve you and your family. Serana would have wanted Lailah and you to be safe. She would have wanted you to live." The realization that the situation was indeed real had scared him. Darrias was no longer emperor. Kratyr was not safe. Lyth was not safe. It was only a matter of time before Klaudius made them all bend the knee whether they liked it or not. He was not opposed to breaking them to get the point across. Thren could not see that happening to his daughter, his precious Lailah. "Protect her Antonius for I can no longer do so." Thren had whispered as he looked towards the door that led to the girl's room. It was in this moment when Antonius had went into the other room to gather his daughter that he felt raw terror. This would be the last time he saw her. He knew it.More to come.