Faora has a minion!

"After the rain,
The sun will reappear
There is life
After the pain,
The joy will still be here!" 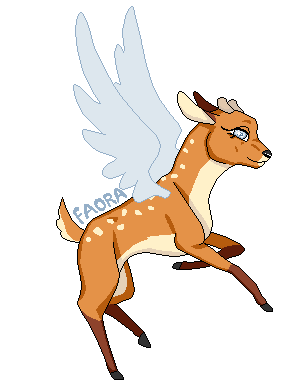 Faora remembers the burning sensation to spread over her muscles the moment she heard the shot. It was a beautiful day, a blue sky and tall grass all around her, but the cherry on top of it all was definitely the fact that her whole family was there, all of them sharing the sun warmth and plentitude of food. The younglings would jump high and run around, but she was entering her teen ages, as the shy pair of horns on top of her head suggested. She was a beautiful doe and she knew it, with her shining coat and a longiline neck, she'd surely find a boyfriend in no time. It never crossed her mind though that the deers weren't the only ones whose attention got caught by her beauty.
Still too young to know, she only heard the loud noise that startled them all, and before she could join the running, the damp and acute pain on her haunch. She remembers the look on her mothers eyes, as she stood there reluctant before having to run and hide and it scared her way more than she already was. Faora took a few steps but she never went too far. 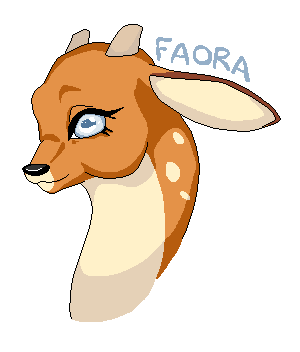 Suddenly, she was there, lying in between tall blades of grass. She could see herself there, as two humanoid figures approached her until she could no longer see... "Wait a minute. That's me? How can I be here and there? What..." but her thoughts were interrupted by the glimmering golden light to spark in front of her eyes.

A few months later, after her departure, heaven opened up and angels fell back to Earth. Faora, still as sweet and beautiful as she was when she was alive, yet nowadays not that innocent anymore, took advantage of her descent to the grounds again to become a protector to those deers and endangered animals from the abuse of hunters and their "sport" of killing innocent beings. She sure can take a hit now, and will use that in favor of anyone in need — don't take those sweet blue eyes for granted, for her legs might be thin and delicate, but she sure has enough fuel inside of her body to go after vengeance for herself and her familiars, as fierce as a doe can be.
She can be spotted running through the tall blades of grass as she loved to do back then, but this time, as the most faithful guardian angel one could ever wish for.

"And colder the winter,
The warmer, the spring;
The deeper the sorrow,
The more our hearts sing;
Even when you can't see it
Inside everything there is life."

Gabbi;
Story and art by

Plant In A Boot Cira
I know, but I can try and I will try.