Mando has a minion! 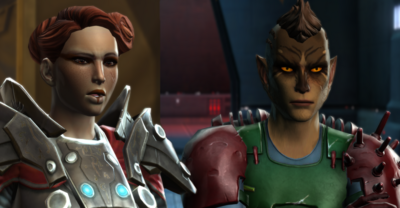 Gemma walked out to the edge of camp , in the tents behind her, her crew slept, camp was quiet aside from the crackle of the fire. It had been a while since she’d had time to do her ‘daily’ remembrance. Some days it just felt too painful, even now. They were gone. They weren’t coming back. And some part of her still felt guilty every time she sat down with her crew, or her clan, or her friends and thought about them as her new family. She sighed and frowned.

It’s what they would want though. “K’oyachi.” Her father’s final words had been a command. K’oyachi. She looked up at the stars, a feeling of bitter emptiness settled in her stomach. She’d been robbed of them far too soon. But she knew that she had to continue to carry on for them. No matter how much it hurt. It was an emotional scar the felt like a festering wound. But she would persevere. A stray tear rolled down her cheek as she began to speak softly, “Ni su'cuyi, gar kyr'adyc, ni partayli, gar darasuum, Maya Ordo, Beviin Vizla, Orin Vizla. Ner cyare'se, ni partayli, gar darasuum.” She wiped her eyes and headed back towards the camp.

Skir’mir was sitting by the fire with a bottle of tihaar in hand. He gave her a soft smile as she approached. “Hey boss, need a drink?”

Gemma felt a small smile tug at the corner of her mouth. “Yeah, I think so.” He poured a two mugs full, and handed her one. “Does it ever get any easier?”

He shook his head and shrugged. “Damned if I know. But friends make it bearable. And a strong drink usually helps.” He raised his glass and smiled. “To the love ones we’ve lost.”

Gemma raised her glass and added, “To the friends that we call family.”

Cullen
Screenshot from Star Wars: The Old Republic / Edit by

Mando'a Translation:
K'oyacyi! Stay Alive! (can also mean Cheers/Hang in there/Come back safely)
Ni su'cuyi, gar kyr'adyc, ni partayli, gar darasuum I'm still alive, but you are dead. I remember you, so you are eternal.
Tihaar: (noun) a strong clear spirit made from fruit

Exciting Crate of Intrigue and Enchantment