The snow frosted landscape was an unyielding yet beautiful picture of cold, a pack of Celinox trudged through it as best they could. The Arctic Frost was aptly named, and a fresh snowfall had covered the mountain paths in a thick layer of icy powder. A small kit hopped from each large indent the adults left to the other. To their right was a sloping hill, and the left, a sharp drop after a few rocks still poking above the snowfall.

“Gwyneirah, be careful.” Her mother called, a few other pack members rolling their eyes in amusement at the kit’s antics. Sure enough, she missed a jump and ended up neck-deep in a snowdrift.

“Moooooooooomma.” She called out pitifully.

“Remember what we taught you. One foot first.” The older individual replied calmly. Slowly extracting herself from the snow, the kit shook herself off, beautiful crystals on her back shining in the sunlight.

“I did it!” Gwyn exclaimed proudly, returning to her hopping pattern as the other pack members, along with her papa, chuckled.

The pack continued to trudge along, getting closer and closer together as the clear air began to thicken. Within an hour, each member could barely see the individual in front of them, the snow whipping this way and that.

They had weathered storms before; but this time, Gwyn wouldn’t be so lucky.

As they walked, she kept her head down, following in the steps of the others. It only took a minute with a few wrong steps, and she found herself alone in the storm. Calling out was useless; the snow muffled all noise.

Something seemed to move on her left, and she happily jumped towards it; maybe it was Momma?

She didn’t know it was a blowing snowdrift at the edge of a cliff.

The last thing Gwyn saw was swirling snow; hiding the rocks below. She closed her eyes as the tumble became a cacophony of pain and impacts. Something hit her back- another sharp object raked her side, and then it felt like every snowflake was a boulder, heavy things pelting her every which way.

She finally stopped, shivering with the cold and letting out a whimper of pain.

Her head was aching, and so she closed her eyes for just a few moments. She couldn’t see through the falling snow anyways..

The small Snoclowd hopped through the deep snowdrifts, scavenging for any possible nuts or the like. It paused, seeing a single out-of-place ear above the snow.

After poking the ear and seeing it twitch, the small fox-like minion let out a trill, staring at it for a few moments. It knew something wasn’t right, that much was certain.

Digging tentatively, it exposed a head, and then a snout. Not food indeed.

Gwyn let out a soft cry, not able to move a muscle as she blinked snow from her eyes. A small fox-like creature stared back at her curiously, digging out around her face.

“T-thank you.” She managed to gasp. All the kit could do was lie there and breath. Even that hurt.

Gwyn couldn’t see the sun’s location, but judging from how hungry she was getting, it must have been mid-day. She still couldn’t move; but someone was coming.

“What the- oh dear!” A gentle voice called out. A soft trill answered the voice.

“Well. I thought you were a pest at first, but look who you saved.” The voice added, snow being scooped out from around Gwyn.

“Red snow, oh you poor thing; glad I was out here. Now for some blankets.."

The kit let out a soft cry, even as being wrapped up. It was nice and warm now, but it still hurt.

“Shhh. I know. I won’t move you much anymore. We need to get you safe, okay? If you are lost, I’ll be sure to find your family once I know you’re going to be okay.” The voice reassured her. That made Gwyn feel a bit better; at least then she’d get to be back with her pack.

Ro carried the kit carefully in her arms, trudging through the deep snowdrifts on her snowshoes. The small Snoclowd followed, but let out a sad chirp as the human stopped.

In front of Ro, a morbid sight greeted her; she had found this kit’s pack.

No doubt swept off the plateau by the same storm, but they had not landed in the drifts like she did. Instead, they lay across the rocks.

The edge of the cliff was far too high to have survived that fall, and Ro couldn’t work those kind of miracles. Not like that.

“Lets…get you back to my home.”

Gwyn finally came out of the never-never-land of sleep, and noticed a few things. First, that she was wrapped head to tail in bandages. Secondly, she was warm.

Finally, there was an odd two-legged animal in front of her, which placed a bowl of steaming ‘something’ near her. The room was made of a rustic wood, pillows, bookshelves, and matching desks placed strategically about near a window or two. A familiar Snoclowd was resting on a large red pillow next to her, cracking open an eye and then closing it again.

“You can call me Ro; I found you in the snowdrifts. You were really hurt- you actually hit the rocks hard enough to break the crystals on your back. But, you’re alive. You’ve been out of it for a good day or so.” She said slowly, making sure the kit understood.

“I’m only here to help. Feel free to stay here as long as you’d like. It will take time for your wounds to heal though. Do you have a name?” She asked.

“G-gwyn..” The kit whispered, still not sure what to make of the kind creature.

“Gwyn. That’s a nice name. I’ll be in and out of this room, just make sure you get plenty of food and rest, okay?” Ro requested.

The stew was rather tasty; and Gwyn downed the entire bowl after Ro had left.

At least she was nice.

After a week, Gwyn had finally healed enough to walk a few steps here and there. Ro had been so nice to her; and was a human apparently. She used.. something called ‘mijik.’ Or similar to that. Gwyn wasn’t too sure what that was, but it must be her job or something. Either way, Momma and Papa talked about humans. Some were nice, others not so much. She had gotten lucky apparently. She did miss her pack horribly though.

“Ro? Can I ask you something?” Gwyn asked, laying down on a cushion near the human.

“Have you found my pack yet? I miss Momma and Papa.”

Ro slowly closed the book she was reading, getting out of her chair and looking at Gwyn. Why were there tears in her eyes?

“Gwyn, you’re a really strong kit, to have gotten through all this. I want you to be able to trust me, so I’ll tell you the truth. You need to still be strong though, okay?” Ro continued, voice slightly wavering.

Gwyn’s eyes widened, shaking her head as the human spoke.

She didn’t believe her.

The next week, when Ro carried her to see the respectful places her pack was buried, she still didn’t believe her.

When Ro handed her a small bracelet that Momma had worn…

“I was trying to read..” The woman chuckled, taking Gwyn off her shoulder and tickling her belly.

After releasing the gasping youngster, Ro looked over to the sleepy Snoclowd; watching them from a pillow.

The small fox actually had the gall to stick out its tongue as it curled up. It was daytime, and it hadn’t slept much last night.

Ro enjoyed the interruptions, as annoying as they were at times. But she could hardly blame Gwyn. The poor dear had everything taken from her so early..

“Hey Gwyn, I have a present for you. Don’t think I forgot your birthday.”

In an instant, she was pounced by an ecstatic ball of fur.

Attacking the produced box and bow with a great deal of ferocity, Gwyn stared at the items inside.

Ro chuckled, carefully placing the curved soft-blue metal pieces on the Celinox’s front and rear limbs. Engravings ran up and down each one, matching perfectly with her fur.

“They’re protective, and stylish, bracers. I made them myself. They’re a nice fit for you. But they’ll be small in a few years. Then you’ll get adult ones. Do you like them?”

Gwyn was quiet for a minute, and then promptly began prancing around the green living room rug, firelight reflecting off the shortened crystals inlaid on her back. “I love them!”

Ro wrapped her up in a hug after a few moments, glad that her work hadn’t been in vain. "Happy Birthday Gwyneirah.”

As the youngster then hopped off to prance some more, Ro couldn’t help but look on and smile.

Even through it all, Gwyn was growing up to be just as happy and go-lucky as ever.

And stronger than anyone Ro had ever seen.

"The best people all have some kind of scar.” - Kiera Cass, The One. 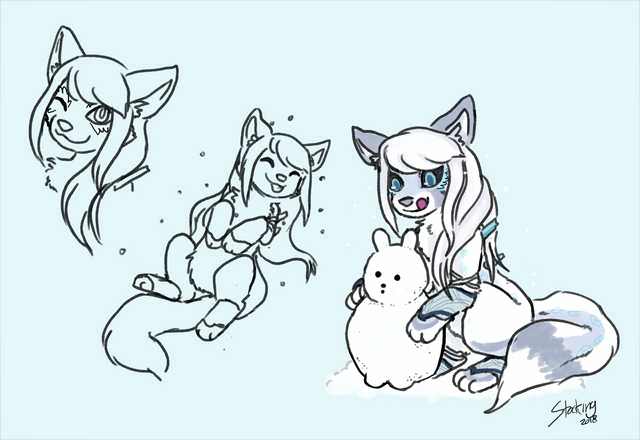