Charm has a minion! 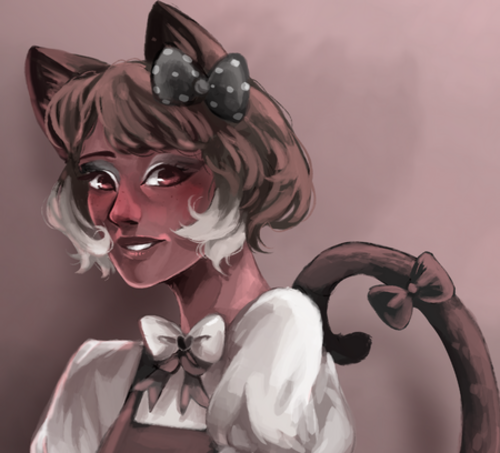 Tonight the club was packed, pretty much a reoccurring theme as of late, crowds of people gathered inside and even spilling out onto the streets, forming a long line halfway around the block. Everyone and their best gal wanted to be there, just for her. They all yearned to hear her alluring voice, catch a glimpse of her stunning beauty. She really knew how to draw them in and with her talent she could keep them there all night, begging for more.

Silvery smoke hung in the air like acrid clouds, the kind that didn't promise rain but they might ruin your night if you weren't careful. Dozens upon dozens of men and women sat around chatting and laughing, drinking and smoking, everyone enjoying just being able to be inside with the good seats, waiting for the show to begin. Off at the bar the old man was barely able to keep up with the orders, if only he wasn't such a stubborn fool and hired some extra hands for nights like this. It's not like he was hurting for money.

Tucked away in her dressing room, Coquet was getting ready for it was almost show time. She stared at her reflection in the large vanity mirror, the lights arranged just right to give her an almost angelic appearance as she patted her cheeks with a fine dark powder that would keep the shine off her skin. She pouted in a sultry manner to make sure her lipstick was even before flashing those pearly whites. Oh yes, she was ready. With a quick fluff to her hair she finally turned away and headed for the door. She had finished her honey laced tea and did her scales moments before so she knew she was ready to face the crowds.

She kept them waiting long enough after all, time to grace them with her presence before they got a little too antsy for their own good.

A hush soon fell over the club as an announcement called for quiet. Soon an introduction was made, Miss Coquet, the starlet of the evening, the woman with the golden pipes would perform. Such an intro was hardly needed, everyone knew her, that's why they were there wasn't it? Still sometimes one couldn't help but enjoy hearing their name being spoken by someone else, made you feel good inside. She stepped onto that stage and the spotlight hit her just right and at that moment she truly felt at peace, like she was home where she belonged. Oh how she'd never tire of that feeling.

Her eyes did a quick sweep of the room as her hand wrapped around the microphone, pulling it just barely an inch from her rouge colored lips, which had been curved up into an almost seductive sort of smile. With a slow breath she let her voice roam free, ensnaring everyone with it's breathy tone, as a quick greeting turned into song she chose to sing one off her latest chart topping record. It was one that always proved to be quite the crowd pleaser. "Another Rose Blooming".

By the time she was done her set there wasn't a dry eye in the house.

She humored them all with an encore, how could she ever say no? With one final song she had gone back to her dressing room to breathe and brew another pot of tea so that her voice could heal and she'd be ready for another set all in due time. As the hour passed she decided to finally leave and go be among people, making a quick trip to the bar, taking her seat and flagging down the old bartender. Luckily she didn't have to say a word because a drink was already set before her and in return she flashed that grin of hers. "Thank you, Andy. It's like you've read my mind." "No, it's more like you never change your ways." She gave him a wink for that one, sipping her drink without another word.

The club was slowly shifting in patrons, many leaving for the night, having been thankful to catch the show, more people now pooling in from the streets to take their place so it was always packed. She watched as men and women mingled with each other and the band in the corner played some tunes that had people dancing. Coquet enjoyed this, for it allowed her a moment to relax and let her gage how good the audience was going to be for her next set. Seems like another good group, that made her feel hopeful for an event free evening. Or perhaps she spoke too soon?

She had just finished her drink when a stranger idled up beside her, wearing a crisp grey suit and smelling of pinewood. He pulled out a sleek cigarette case and held it out to her, offering her one. Of course she never was one to partake, she had to look after those golden pipes of hers now didn't she? She merely shook her head, careful not to muss her dark locks. Instead a smile, simple and coy was all she offered him before she attempted to move by and head back to her dressing room.

It would seem he was having none of that, clearly not liking the idea of being rejected, let alone by a woman of her... caliber. Before she could even get by him he grabbed her upper arm and stopped her in her tracks, his calm demeanor now faded and he was red in the face. How dare she make a fool of him! "Listen you," His choice in words was harsh and yet she wasn't even taken back by them, having heard far worse growing up. Still that didn't mean she was going to allow someone like him to get away with insulting her. Coquet had her pride and never let anyone try and shame her. Not now, not ever!

With a careful twist of her arm she worked her way free, not liking his fingerprints pressed into her skin but it would fade in due time. She turned to face him, hands on her hips and a fire in her eyes. Oh there was no need to stoop to his level, she wasn't stupid, no she merely stood her ground and showed this ignorant fool she wasn't scared of him, nor was she threatened by him and his childish need to call her names all because he didn't get what he wanted. Really all he was doing was resorting to bullying and that just made her sad.

When she spoke her tone was calm, her voice smooth. She wasn't going to let anger rule her, besides getting all bothered and yelling at someone wasn't good on the voice box and she had several more shows to do tonight. So instead she locked eyes with this stranger and just said what she needed to say. "You can try and tear me down all you want, that seems to be all you men ever do when you don't get your way, using harsh words to try and wound us, to make us feel like we're nothing more than the dirt under your shoe. Well, I'm not letting you have that satisfaction. You can call me all the names in the book until you're blue in the face but in the end it won't make a lick of difference because all you've done tonight is prove you're still just a little boy in a man's suit, making others feel small just to build yourself up."

With that she turned on her heel and walked away, Ol' Andy hurrying over to her waving to a pair of men who hurried over and quickly escorted the rude man out of the club as a silence now hung in the air. "You going to be alright?" Coquet sighed but turned her frown upside down, placing a hand on Andy's and squeezing it gently. "I will be. He's not the first to try and bring me down and he most likely won't be the last but I'll keep standing up for myself and others if I have to. No one should ever have to feel like they are less than human."

With that she made her way back to her dressing room, closing the door behind her and giving herself a chance to compose herself, sparing a glance at her reflection and quickly grabbing for her makeup and fixing anything that looked out of place. She soon forgot all about the incident and just focused on the night ahead of her, she still have plenty of songs to sing and there was a whole club out there just begging for her to get back out onto that stage.

Oh will you never let me be?
Oh will you never set me free?
The ties that bound us are still around us
There's no escape that I can see
And still those little things remain
That bring me happiness or pain

You came, you saw, you conquered me
When you did that to me
I somehow knew that this had to be

The winds of march that make my heart a dancer
A telephone that rings, but who's to answer?
Oh, how the ghost of you clings
These foolish things
Remind me of you

The sigh of midnight trains in empty stations
Silk stockings thrown aside, dance invitations
Oh, how the ghost of you clings
These foolish things
Remind me of you

How strange, how sweet to find you still
These things are dear to me
That seem to bring you so near to me

The scent of smould'ring leaves, the wail of steamers
Two lovers on the street who walk like dreamers
Oh, how the ghost of you clings
These foolish things
Remind me of you

Lea.
Portrait by Keturah
Story by

Virus
These Foolish Things (Remind Me of You) by Jack Strachey, Eric Maschwitz
Credit art portrait by Z4D
More of Coquet's art here. 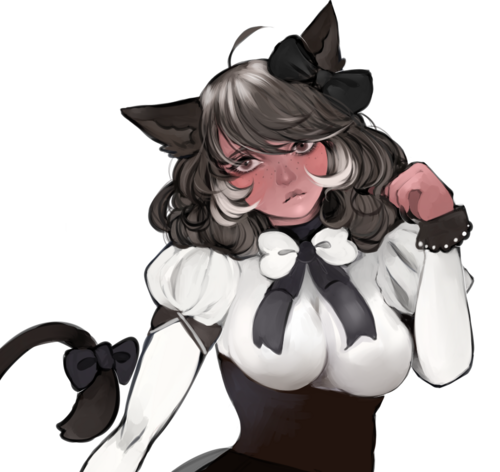 Memory from a Happy Summer