Jadden has a minion!

Carron and Galaxa the Pair of Lovebirds 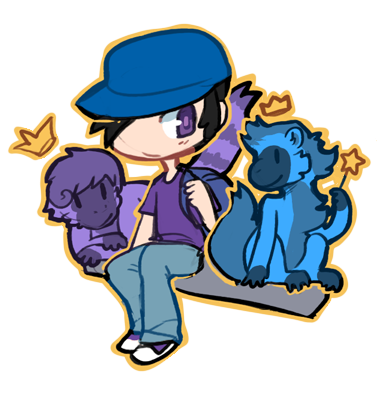 The music echoed through the vast mansion, haunting the hallways with its gentle wailing. Jadden’s fingers danced on the strings as the bow jerked and glided along, creating an aching sound that made one’s heart tender. As much as he loved Jadden’s playing, he hated when it dove to these depths. The notes that crept forth from the dark places Jadden tried to hard to keep hidden. She always tried so hard to be strong. The music built a wall so high, protecting her heart from the disappointments of life. Every note sang of being hurt and abused in ways no one ever should be.

It shattered the singer’s heart. He wanted nothing more than to rush upstairs and gather the wounded youth in his arms, and never let her go. But he also knew how useless that was. The man had learned long ago Jadden wasn’t someone to be kept. Much like the music she created, Jadden wasn’t something you could take. She invaded your emotions, intoxicated your senses and then abruptly left, leaving you more than a little dazed. Also like the music she made, she needed careful tending. Too much or too little and you got a sour note. This was why he didn’t stay too long, it's why he wandered and toured. It made the ultimate reunion that much sweeter.

Maybe it was because he was a musician too. He understood Jadden in a way no one else could, or maybe they just didn’t care to. He knew when she needed space, and he knew when she just needed him there. No words, no touch, just his presence. Right now, he knew she wanted to be alone with her music. The haunting melody told him everything he needed to know. Every note, every wavering sound was played with such intensity. It tore and tugged at his heartstrings. It made him want to join her soft music with his own.

But he knew he had to wait. He couldn’t rush, he couldn’t force anything on to her. He had to let the violinist upstairs finish or everything would fall to pieces. This was something he had learned long ago. So he sat and listened, savoring every moment of the somber euphony.

The man knew he was lucky. Jadden’s music was a rare treat. No one got to hear her play the way he did. It was her own private secret, something she kept locked away, only showing to those few special people. He was so very thankful to be counted among them.

While people may have seen Jadden as being the lucky one, being oh so very close with singing-sensation that he was, the man in question thought the very opposite. He wouldn’t be anywhere without Jadden. She had pushed him to follow his musical career, she had pushed him to follow his dreams, and she had asked for nothing in return. People always tried to become his friend, fighting for his attention, but then never wanted to get close to him for him. It was his fame or popularity or wealth or looks. Jadden had always been that exception. She supported him for him. Before he was famous, before everyone knew him, Jadden had been there. They had been there for eachother. Patching the other’s wounds, chasing away the nightmares, and sharing their dreams.

People always asked him why he returned time and time again to dim city. Why do you bother with such a small, nothing town? While his answer is always simply “because its home”, she knows the real reason. Its always a girl. But sometimes its a boy. He never bothered to look too much into Jadden’s gender. He just wanted to make her feel special.

Which was why he got to listen, ever patient to the staccato notes that hung heavy in the air. The sharp ups and downs, followed by the ever quiet sighs. If you asked him to describe her music, he’d come up empty. Describing music was as impossible as describing the love he had for her. His special violinist who warmed his heart over and over again.

The music came to an abrupt end and the singer’s ears perked. He could almost see her carefully putting the violin back in its case, followed by the bow. She’d give her lemurs an affectionate scratch behind the ears, maybe a treat and then she’d open the door and say-

“You might as well come up. I know sitting still kills you.”

The smile they shared was enough for him. It was a special little smile she saved only for him. Just like her music, it was one of his favorite secrets. Without a second thought, he made his way up the grand staircase to her room. He placed a delicate kiss on her lips, placing his hands ever so softly on her hips. A gentle sigh escaped her lips as she wrapped her arms around the taller man’s neck.

Jadden is an enigma. They're class president, have high grades and help with tons of stuff around the school. They're also filthy rich. Their mother was a professional violinist and their father came from a wealthy background, spending most of his time investing in stocks/high end houses. Both are rarely if ever home due to concerts/business. But when they are home, they put a lot of pressure on Jadden for their gender. Assigned female at birth but agender at heart, they struggle with pleasing rather loveless parents that force them to practice the violin and achieve in school. When they're not home, Jadden often throws massive parties where they partake in a lot of drinking and "connecting" with others to drown their sorrows.

profile and coding by

piers.
backgrounds from bwallpapers and deskbg
Side box images by Theme
Main image by PKingSora
Overlay by

Alphys
All lyrics by Marina and the Diamons
Story by Riley