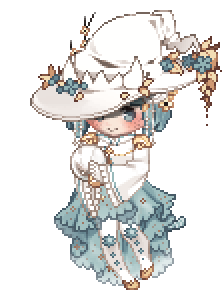 A star who's practicing magic. She's classified as a witch in Earth's standards and also the curse she unfortunately bumped into. She's very kind and gentle who cares for others' wellbeing.

She lives in a gigantic Lion's Mane jellyfish, the bell dome being her main living quarters. The entrance being covered by the "curtain" tentacles.

She is in love with a migrating bird but because of her curse being seabound after arriving to Earth, she desperately wants to at least join her love in the skies.

Her lover gave her Sully as her first familiar, although he didn't mean to give Uomi the mouse as such. (He intended it as a gift to celebrate their relationship.)
Name: Uomi
Age: 1.3 billion star years
Race: Star
Star type: B(e) star
Affinity: Water
Role: Cosmic Witch
A star is born to do several things, some become overseers to each designated planets, some become a travelling stars to venture out the probability of the universe' limits and some, practice magic to become greater. Uomi, a newly born Cosmic Witch was greeted by the higher ranking magic practitioners. Stars usually are born with an element affinity to use with their everyday life. As such, Uomi was bestowed the affinity for water.

Uomi was taught thoroughly by fellow magic practitioners. Her life was slow but she enjoyed it. After several million years, most stars who studied Magic finally graduated and the stars are finally designated to a planet to practice their magic further and return back to lead life in the cosmic plane. There were murmurs, stars wanting to go to a specific galaxy cluster to study magic. After few minutes of waiting and murmuring, they were hushed by the Head.

They called each passing star one by one to give the coordinates of their designated stars to study further. The first one who received their coordinates, grinned. Their body starts to sparkle and shine. Everyone was filled with excitement as the star flew away leaving a trail of light.

Finally, it was Uomi's turn. She received her coordinates, which was pinpointing the Milky Way Galaxy, and the planet Earth. Uomi is worried about stars that conflict the composition of planets as Earth was a host to luscious and blooming life. The Head reassured Uomi that all stars practicing Magic will adapt to their host planets and cause no harm. Relieved, Uomi prepared herself to fly towards Earth.

To stars, a decade or a millennia is nothing to them as they have almost to no concept of time. Living in the cosmic plane, time do not exist normally. Uomi's travel took several decades until she reached Earth. Her descent was seen as a shooting star to the inhabitants of the Earth and a few hours, the stream of light starts to form like a flower and opened up, revealing Uomi. She looked around her host planet, worriedly as she's afraid of damaging the natural form of host planets. After a while, she realized she was slightly floating above the Earth's ocean.

BIG ASS WIP. TL;DR: Uomi came from the skies and pretty much will experience ups and downs after arriving to Earth.

Lea.
Overlay art by Silhh
Credit: Avatar base and items from GaiaOnline.
Avatar was created and put together by me @ GaiaOnline.
back