Lorath has a minion!

To be Horadrim is to put the lives of others before your own. 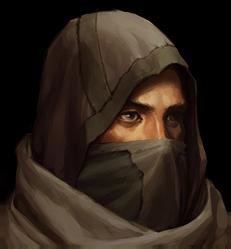 "The seraph was on me before I knew it, the mass of its bloated flesh soundless as it floated above the ground. When I finally noticed it, I could not move: it was as though I was trapped in a waking nightmare. I looked down and saw tendrils of energy wrapped around my feet and realized it was not fear that held me, but the seraph's magic."


"When I first beheld the corpse raiser, I thought myself capable of defeating him. Then he reached out his arm, and the ground in front of him was bathed in a spectral light. The bones of men and beasts rose from the earth and advanced on me."

Lorath Nahr, a young member of the Westmarch City Guard, stared at the man in front of him.

"Excuse me, you said what?" Puzzled he continued to stare at the other man, who had intruduced himself as Tyrael, former Angel of Justice, now turned mortal. He couldn't believe what he had heard.

"I said I want to refound the Order of the Horadrim. And, considering your talent in martial weapons and magic, I'd want to recruit you." He returned Lorath's staring with a half concerned half asking look on his face. The younger coughed slightly and blushed.

"I... I'm honored, but I doubt I could be of good use to you. Though I admit that I grew up listening to the stories of the Horadrim and..." He paused.

"You what?" Tyrael's voice sounded encouraging, and he even smiled a little when Lorath raised his head again to look at him.

"I always wished to be a Horadrim. I've learned everything about them. But as I said, I'd not be of good use to you, sorry." The young city guard turned to go, but suddenly the bigger man stepped forward and prevented him from leaving by placing both hands against the wall. Lorath, trapped between the mortal Angel and the wall, held his breath.

"I am serious, Lorath. And you're way too modest, my friend. I wouldn't recruit you if you would be a burden for the new Horadrim. You are a skilled fighter, you know magic and, most importantly, you are brave. Please consider my request." He pushed Lorath nearer against the wall, whispering near his left ear as he continued: "I need you." With a sudden movement he gave the city guard free again. "You know where to find me once you've decided."


He is fighting his way through corpse raisers and their skeletal minions. He has to find the Nephalem. Gasping for breath, Lorath looks around. Why did he even say yes to Tyrael? Sure, he always wanted to be a Horadrim, felt honored that the former angel saw him as trustworthy enough, but he never thought he'd end up here in this hell. Most of his comrades died already and now he stands here, facing terrors he could've never imagined.

With a quick movement he dodges the attack of a skeletal warrior and counters. Just go down already! he thinks before attacking another time, stronger than before. With an unnatural scream the skeleton falls into pieces, bones scattered across the street. Lorath looks up to the corpse raiser. Go! Go, find the Nephalem! he hears Tyrael's voice in his head, still hears the horrendous screams he witnessed while leaving the cave where Tyrael, he and the other Horadrim wanted to hide the Black Soulstone. He still sees the huge black and faceless grim reaper, or how Tyrael called him: Malthael. With these thoughts he just starts to run again, ignoring the stabbing pain in his right arm caused by a wound one of the skeletal warriors had slashed in it with its sword. Heavily breathing he makes his way through streets and narrow side alleys, until he finally reaches the Westmarch outskirts. Leaving the city through a gate, he takes a glance over his shoulder. Skeletons and wraiths are following close behind and he knows it is only a matter of time until they catch up and he has to fight them again. He must find the Nephalem before it's too late for everyone and he knows that failure would be disastrous.

*Diablo fanpet based on Lorath Nahr (Reaper of Souls)