The angel manchu was always up for trying new bizarre foods. She was a frequent customer at Rathskeller Inn, being among the first customers to try a newly released dish. Babette found Gemberry one of her sweetest and most polite customers. The shopkeeper’s fondness for the manchu might have been due to the fact that Gemberry didn’t drink, a difference that set Gemberry apart from another regular who became disorderly after having too many drinks.

Gemberry also frequented the Atebus shop and the Lost Skeleton, though to a lesser degree than the humble inn on the Omen Islands. Gemberry absolutely LOVED the Space Ice Cream sold at the Atebus Shop and almost always bought a few containers whenever she came to the shop. At the Lost Skeleton, Gemberry spent time chatting with the shopkeeper, Bubbles, about his recipes and inquiring about any new wares. Gemberry’s favorite Lost Skeleton item was the various bone chips.

Gemberry eventually desired to cook some unique dishes of her own, so the manchu began seeking out inspiration from other likeminded chefs. She formed a friendship with the Half-Baked shopkeeper, Elsie, and began helping the zombie with trying out new recipes. Gemberry also began trying to create her own recipes using some of the unique foods she bought from the shops. The results were always interesting, but many Subetans were reluctant to taste test her dishes…. Despite the rejections, Gemberry continued her experimental cooking.

When Neugarten rose to prominence, Gemberry traveled to Veta in order to sample the wares. After arriving, the manchu’s interest was piqued by the various vegan foods being offered. Gemberry found herself enjoying the rich unique flavors of the Neugarten wares and bought some to take home with her, while learning of the regional vendors who offered the foods at their locales. The angel manchu wanted to meet the vendors in order to learn the best ways to use the devonti cheese she had picked up in her recipes.

Several months after Neugarten, Gemberry caught the eye of a mysterious man. He invited Gemberry to his mansion in Darkside, stating that he wished to be a sponsor for her bizarre cooking. Apparently the mysterious man took those who held interest in bizarre things under his wing and helped them achieve their potential. Despite some slight trepidation, Gemberry accepted his offer.

The manchu spent the next couple of months at her sponsor’s mansion honing her cooking skills. When Gemberry first came to the mansion the man gave her some special herbs that he claimed would greatly enhance her recipes. Gemberry soon discovered that using the herbs had a side effect: items that came into contact with the herbs came to life as food minions! Despite the shock, Gemberry chose to keep some of these newly born minions around her kitchen as helpers. Her favorite was an sentient egg named Yolki. He had come to life after Gemberry accidentally spilled a broth containing the special herbs she had been given on an egg she had set aside for another dish. Yolki had a very sweet personality and began to help Gemberry when she was cooking. He would pick up cooking utensils and ingredients and hand them to the manchu. Every so often, Gemberry’s sponsor would come to Gemberry’s kitchen and offer to take the so-called “pests” off her hands. Gemberry granted him permission to take the minions, but she insisted on keeping Yolki and a few other favorites with her. The sponsor was confused by Gemberry’s desire to keep some of the food minions with her, but he didn’t try to press the issue.

Eventually Gemberry found out her sponsor was using her to create food experiments for his research. He would use various tools in order to extract magical essence from the minions. The sponsor turned out to be a mad scientist who sometimes turned some of the food minions into vicious monsters as a side effect of certain experiments. After some thought, the manchu decided that she needed to rescue the innocent food minions from the cruel and unethical scientist.

One night, while the horrible man was away on a business trip, Gemberry snuck into his lab with Yolki. Gemberry quickly noticed the sad faces of many of the minions, who were in cages recovering from the pain they had endured from recent experiments. Gemberry attempted to open the cages via picking the lock using some of her kitchen utensils, but the manchu was only able to open some of the cages with this method. Disappointed but not ready to give up, Gemberry gave a whistle. A giant Bunigiri that Gemberry had named Sushati hopped into the lab. The bunigiri had been vicious at some point as a side effect of the experiments done on her, but Gemberry eventually tamed Sushati with her patient and kind heart. Gemberry pointed at the cages, and Sushati managed to destroy the cages by gnawing on them with her teeth. The scientist’s experiments on the food minions occasionally enhanced their abilities; in Sushati’s case the experimentation had given her teeth that could cut through steel. Once the minions were freed from the cages, Gemberry led them all out of the mansion. 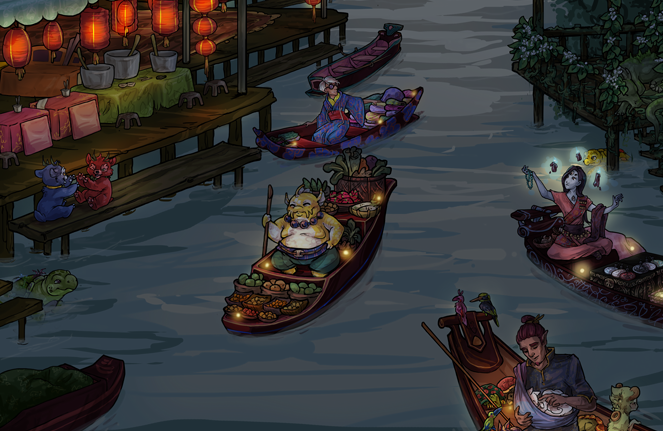 Gemberry and her food minions moved to Shengui Guo in order for the minions to run around in fresh air and open fields and for Gemberry to be near the floating market. During her time at the mad scientist’s mansion, Gemberry had traveled to Shengui Guo. While there, the manchu learned of Fresh and Flavorful’s existence and bought some of the shop’s wares to use in her recipes.

After two months of living in Shengui Guo, one day Dara, the minion shopkeeper of the Floating Market, noticed Yolki on Gemberry’s head and struck up a conversation with the manchu. Dara was moved by Gemberry’s story and offered to help her find homes for some of her food minions. Some of Dara’s customers learned of Gemberry’s tale and advised the manchu to talk to the Wizard. The Wizard agreed with Gemberry that the experiments of the mad scientist were problematic, for he had personally experienced his magic turn food into vicious monsters that threatened the welfare of other Subetans.

Gemberry decided to alert the SAI of her former sponsor’s whereabouts and activities. The SAI did a raid on the scientist’s mansion, where they found stacks of documentation concerning his unethical experiments. The scientist was arrested and put in jail until a trial date was set.

A few months later, Gemberry encountered an irion named Alessandre, who traveled around Subeta to guide food minions into a safe haven and paradise for them. After hearing Gemberry’s tale, Alessandre complimented Gemberry for her kindness and stated that she was willing to take any food minions off Gemberry’s hands and take them to the fabled food minion paradise. Gemberry brought Alessandre to her home, and some minions did indeed choose to leave with the irion. However, Yolki and Sushati were determined to stay by Gemberry’s side forever. As Alessandre left to bring the food minions to their new home, the irion told Gemberry to contact her if any more food minions needed saving.

Scar for adopting out this pet to me!

Baked Fish Heads in a Basket

Pumpkin and Corn Chowder in a Pumpkin