Rengoku has a minion! 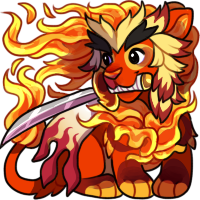 Hello! This description and story have mayor spoilers about Infinite Train Arc «Mugen Train» to Kimetsu no Yaiba. Read with caution!

Rengoku Kyōjurō (煉獄 杏寿郎), the Flame Pillar of the Demon Slaying Corps (Kisatsutai), one of the nine top-ranked and most powerful swordsmen among the Demon Slayers.
He loves saving people.

He's a pillar (Hashira), the symbol of fire, of the sun, of the passion reigning in one’s eyes. Rengoku wields his sword as if it is only just a pen and he writes death upon the demon's necks.
The nature calls his name and he heeds towards the call of help. His Kawl madly screeching behind him, of murder, of death, of comrades' and their fall, and of the lower moon who brought it upon them.

It’s the flame pillar, the demon says, its tongues twisting in different ways, spitting venom upon his title. Rengoku-san, his people call out, their limbs broken and crushed beneath the damned demon.

Rengoku grips his sword as he formulates a strategy in mind. The neck, go for the neck, thenecktheneck, fire starts burning through his eyes and scorching the demon’s skin. Breath of Flames, First Form: Sea of Fire (Ichi no kata: Shiranui).

There is, as there would always be, a lot of beating coming from both sides, but he is the flame pillar—

Rengoku-san, do you reign the sun?
—and no one will be able to put out his fire.
Sure I do!

His father Shinjurō had told him, when he was naive and young and could only coo at his baby brother Senjurō, way before he left their household and their ties began to severe: One day when you grow up, save all who can be saved. He was seven, Kyōjurō did not want to grow up and leave the safety of his home, just like how every child should be. He did not understand what his father meant, but nodded his head anyways because he did not want to ignite his father’s anger.

A few nights passed and there it was, a report to his father that a demon had attacked the peace and order of their neighborhood. Rengoku saw blood, the lady that once gave him candy was lying on the cold ground, with all the life that her pupils once held extinguished the moment his eyes— full of horror— met hers— also full of terror, but mixed with pain and anguish—, she was bleeding from her stomach, he was exposed to such graphic violence in a young age. He felt the blood of the flames flowing through his veins, it was what one would say: his calling .

That same day was when he had asked his father to teach him the sword and the breaths of the flames.

Father, how can we teach a demon to be good?

He brought up the question soon after, with his back facing his father and as he watched his sickly mother lay bedridden on her bed. His father looked at him with emotions that a seven-year-old couldn’t possibly understand.

...There is no way. All evil must be punished by our swords.

And then he met the Kamado siblings. He saw the raw fury in Tanjirō’s eyes when Sanemi stabbed his sister through her wooden box, how strong your bond must be, he thought, to want to fight for your loved ones even if they could do you harm anytime.
But no matter how strong their bond was, it would not change the fact that Nezuko was a demon and all evil must be punished.

He was ready to pull out his sword, but Oyakata-sama said

I accept Nezuko as a part of the Demon Slayers

The night of meeting the said siblings, in the peace of his residence, he thought about how his father would react once the news that ‘the team that hunts demons now has a demon in their team’ reached his ears.

I’ll be back, father.

Those were his last words to his father before he became a pillar.
It was hard.
His father was yelling at him to get lost, shouting at him that he had always been an incompetent swordsman and that he’ll die before he achieved the position that he desired. It was even harder for his little brother who he needed to leave in the hands of his madman of a dad.

He learned how to work with the knowledge that a demon was working with them, among them. It was hard at first, he, along with the other pillars, would sense a demon nearby and they would pull out their swords, but soon it would turn out that it was just Tanjirō giving his sister a tour of their headquarters. It was stupid, but he had always been flexible in dealing with sudden changes.

He could learn.
Rengoku truly loves saving people.
His mother taught him, there are only three stages in terms of helping those in need.

He wakes up. The train is moving and his flames sense a coldness creeping within his core. The people in the train were all fast asleep due to the demon’s blood technique.

He moves. He slices through the demon’s manifestation and guards the rear vehicles. He sees Nezuko, covered in her own blood, fighting off her own kind. It truly is a strange sight.

Kamado, my boy. If I die, it will be my loss

He is bleeding all over, there is no absolute way that he will be able to survive. He finds himself basking in the glory of being able to protect hundreds of people in the train than to grieve in the taste of death and defeat.

Come, let’s have a final chat

Tanjirō turns to him after screaming his lungs out, the image of the entire galaxy revolving around his eyes is replaced with the reflection of his bloodied figure. He talks to him until the sun fully rises, until he sees his mother, to whom he was thankful that she was the one to give birth to him.

Mother, same goes for me. It was an honor to have someone like you give birth to me
I will not be able for much longer, it was a blessing to become the mother of such a strong, gentle child. Now I beg of you...

His body hurts and his flames won’t ignite, but looking at her and the warmth that her being holds, he thinks that he understand now the true means of saving a life, of being a hero, of being a pillar, of reigning the sun. Death is clinging to his shoulder, but it is the time when he feels wholly alive.

Did I do everything right? Was I able to fulfill everything I was supposed to carry out?

You did a wonderful job
Rengoku still swears to save even more people on his next life
...When...he's Reborn 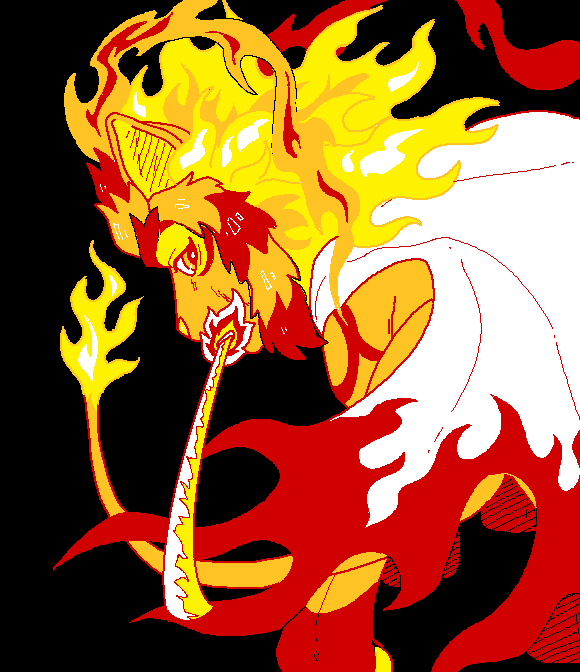 Rengoku is a fanpet based off Kyojuro Rengoku from Kimetsu no Yaiba manga created by Koyoharu Gotōge.

Faber and edited by

Trickster (me)
X by User not found: mementomori

Believe In Yourself Sticker

The Flaming Book of Flaming

Youre My Sweet Potato Sticker