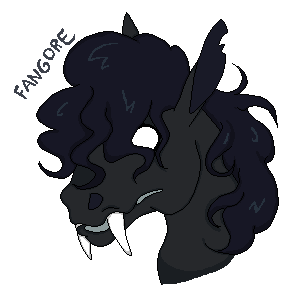 Big hooves and even bigger teeth, the mysterious creature lurks silently in the dark. Perhaps it is the big amount of fur to keep its steps soundless and as it should be, for this dark beast walks on the most quiet of all realms to exist: the dreams.
If you're familiar with the faes who roam all living beings' thoughts and care to bring only colors and joy to their minds, this one is the complete opposite. Fangore is one of the twisted ones, for he'll feed on anything good and leave the minds in misery dark, filled with their worse nightmares. He feast upon happy thoughts, cherished memories and vibrant colors, and he'll sneak up your sleep if your dreams are happy enough.
Sure the other faes that work on spreading the rainbow also do their best to leave no trace behind, no clue that will draw the horrid creature's attention but yet Fangore has no hurry at all. He walks slowly, patiently, while he visits the most dreamthoughts he can find. 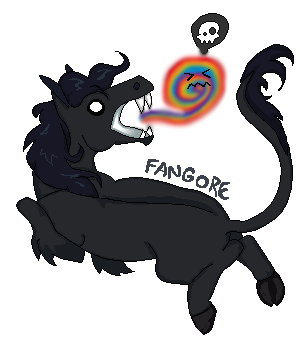 The origin of this devourer is unknown, perhaps a twisted soul who couldn't keep his colors. And his hunger is unending.
Fangore met with a benevolent fae once — unfortunately for both, but mostly her. As she was building a rainbow vortex inside a random dream bubble somewhere, he entered the same dream at the same time. "Ahh!", the little Feli was startled, surprised for she was not expecting anyone else, not to mention a large dark figure to stalk from the behind. "Sorry, I wasn't waiting for visitors. Heh. What's your name?" she asked, politely and with a vibrating energy so you could sense she was in the beggining of her works. But Fangore replied nothing. "Eh... Oh, have you come to help? I can sure do some help. This guy has had some horrid dreams and needs all the colors to brighten his life!", she was enthusiastic about it, he could tell by her stamp.
The silence was disturbing. Not to mention, Fangore barely moved ever since the Feli had put her eyes on him. The happy-go-luck fae was starting to feel a bit nervous, confused by the lack of interation from the other party. She even thought to herself she might be smelling bad perhaps? But that was nonsense, she had such a good pink scented smell. And as she turned her back to the dark creature to work on her vortex, she thought she felt something. And as she looked back he wasn't there anymore. And with a weird noise as if a baby was sucking on a pacifier, she turned again to look at the vortex.

Fangore was there, his mouth open wide, as wide as a snake's mouth could do, and the fangs... Oh the fangs shined bright as the rainbowy lights crashed through them. With a scream, the Feli faded away from that dreams and woke up with a jumpscare, no chance to take a second look. And she shouldn't, for she'd only break her heart if she saw the pitchblack mantle covering all until not a single drop of color was left behind.

They know him now, for the sake of the fae's community. Nothing that worries Fangore, for until the present day no one has dared to face him and until then he'll just keep feasting. And he won't stop.

"Don't trust him
When his eyes are closed
He still looks at you..."

FallenSamurai;
Background image from Wallpaper Vortex;;
Lyrics: The Girl Who Was Death by Devil Doll. Vortex
I can still see you... Mika
I want the colors...