Eros has a minion! 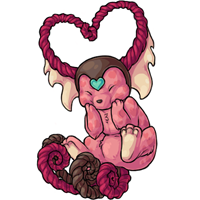 Easily distracted by the tiniest of things, Eros can often be seen as an unreliable, impulsive Kora whose direction changes as much as the wind. He prefers to live his life unbound by rules of expectation, and in turn, is a free spirit, perhaps too free. Often seen wandering off, or not paying attention, Eros is quick to address his constantly changing world, and as a result, can quickly adapt to the situation at hand. This isn't to say he will do the right thing in those situations, as this Kora can be rather immature in his way, taking the most reckless and childish route possible. But if there is one constant about him, it's Eros' need for action, whatever it might be.

Quiet but not timid, Eros is a loner who often walks in the shadows of another, his steps taking him towards a fate that is him own, and a path that is another's. Many misjudge Eros, taking him for granted and easily manipulating him due to a naivety he has failed to outgrow. He is not a will-less creature, he is not blind to the wrongdoings of another, but forgives and accepts such things. Those who've showed him kindness, even through lies and greed, gain his loyalty. Impressionable and seemingly submissive, he is a firefly easily lured in by a light, even when that light is pitch black.
Come along with me
And the butterflies and bees
We can wander through the forest
And do so as we please
Come along with me
To a cliff under a tree
Where we can gaze upon the water
As an everlasting dream
All of my collections
I'll share them all with you
Maybe by next summer
We won't have changed our tunes
Pet profile by Relu. Do not steal.
Impressionable
docile
dependent
Distracted
impulsive
immature
bashful