Phaze has a minion!

Phaze is a Dream Stealer. He only likes the company of humans if he is watching them sleep...and stealing from their thoughts. How does this happen? Phaze uses a mind meld while the victims are sleeping and steals the auras from their subconscious thoughts, be they good or bad - he then leaves nightmares in its place. The aura gives him knowledge and power, and drains the human of energy, leaving them with restless sleep and bad dreams. Ever wonder why you feel so tired sometimes after a long nights sleep? Well now you know why.

There are many Dream Stealers, although they always work alone. Their nights are filled by absorbing the auras and leaving nightmares. Their days are spent resting and absorbing the knowledge gained from the previous night. The power Phaze gains from the auras are used to increase his knowledge of the outside world. He has no interaction with others, he learns everything he knows from humans while they are sleeping. Phaze has no wish to spend any time with anyone, he likes the solitude and silence of his world.

The Dream Stealers have been around since time began. As a Dreamling (a young Dream Stealer), Phaze was taught how to steal auras by a Dream Master. All Dreamlings are assigned a Master, who will teach them everything they need to carry on the work of the elders and become a fully-fledged Dream Stealer. One day, when Phaze is too old to carry on stealing auras, he hopes to become a Master, and pass on his knowledge before his life is finished.

Although he likes to be alone, Phaze does however have one form of company - his minion, Silas. All Dream Stealers have their own minion to aid them. Silas is his scout - he flies into the dark of night, to find a sleeping victim. They have a telepathic connection, and Silas uses this to guide Phaze to the sleeper. In return, Phaze feeds him, and offers him sanctuary from the outside world. They are both alike, both loners - they suit each other well. Silas is indispensable, and Phaze knows he could not complete his work without him. If he loses Silas, he loses everything.

For as long as he can, Phaze will continue to gain knowledge and steal dreams. Once the end is near, and Phaze has taught his Dreamling everything he knows, Silas will fly away, never to return. Phaze will then be able to make his final plans, and have his passing blessed by a Dream Master. A new Dreamling will take his place, and the cycle will continue again. 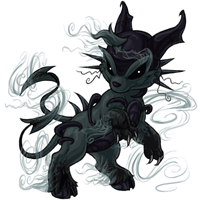 Eater of Dreams and Nightmares